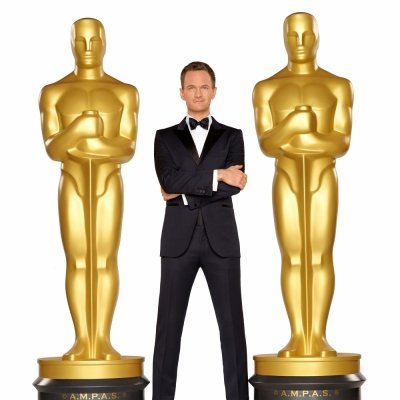 So it was the biggest Hollywood night of the year (well not quite because the new Star Wars movie comes out in December!) and we tuned in to see the great and good of the movie industry strut their stuff on the red carpet before finding out who were the winners and losers in the 87th Oscars.

Selecting Neil Patrick Harris to front the show for his first time was initially genius. He’s a song and dance man through and through, and anticipation was rampant for a return to the toe tapping style of former presenter Hugh Jackman. Dapper in a two shades of grey suit on the red carpet, NPH swapped into a regular tux and got the ceremony rolling in rip roaring style with a true Broadway style opening number. And it was a lovely surprise when he was joined by Anna Kendrick and Jack Black.

Although the best photo opportunity of the night - red carpet wise - was the ensemble of the cast of Grand Budapest Hotel, I must give a shout out to our British men on the red carpet. They looked great. They took some chances and really pulled it off. David Oyelowo went for a deep red tux, it was blue for Eddie Redmayne, while Benedict Cumberbatch rocked it in white. And he positively beamed next to his new wife Sophie, who was glowing in her pregnancy in scarlet. And to cap it all, Eddie Redmayne took the gong for Actor in a Leading Role.

3 Oscar for Actor in a Supporting Role

The little speech from J.K. Simmons was rather touching. No gushing thank yous to an endless list of cast and crew and family members, but a heartfelt message to everyone to remember they have parents and to call them. No emails. No texting. Pick and the phone and call them. Sweet. (Although his red carpet hat was rather questionable!)

This movie was such an offbeat treasure – but can that not be applied to all Wes Anderson films? I was rooting for this one because my mother really doesn’t have a sense of humor. Few things make her laugh, yet we watched this movie together and I think I got more from seeing her laugh out loud and often, than I did from laughing at the movie myself. It may not have one any of the blue riband awards but it took away the same number of Oscars as Birdman.

One of the best moments of the night was director Pawel Pawlikowski refusing to be rushed off the stage by the music signaling it was time for him to wrap up his acceptance speech (for Ida - Best Film in a Foreign Language) . He resolutely plowed on despite the music getting louder and finished what he wanted to say.

6 The Most Kitsch Moment Award Goes to

The bouncy almost muppet-esque- come-Glee performance of the Oscar-nominated song from The Lego Movie – Everything is Awesome. It was crazy, riotous and very slightly weird. Actually a lot weird. It was like Sesame Street,. the Village People and a kid’s fancy dress party had wandered into the wrong studio. And they handed out Lego Oscars! Maybe someone dropped some acid in my diet cherry coke when I wasn’t watching?

7 The Moment of the Night Goes to

NPH in white briefs and black socks and nothing else but sheer balls for standing on that stage half naked.(In a tribute to Birdman and Whiplash) Sadly, his performance seemed to go from bland to bleugh after this. His timing seemed really off.

8 And the Soapbox Moment Goes to

Patricia Arquette shouting out for equal pay and women’s rights in the United States of America in her acceptance speech after picking up the award for Best Actress in a Supporting Role (for Boyhood). She managed to get a cry for ecological consciousness in there too and was roundly applauded by Meryl Streep who was on her feet. A great feminist moment for the Oscars in a ceremony where female nominees were grossly under-represented. No female directors or writers were nominated.

9 The Style Moment Goes to

The award has to go to Rita Ora for her short sleek blonde cut. And she belted out Oscar-nominated song, Grateful, from Beyond the Lights, pretty darned finely too.

Came from the President of the Academy – Cheryl Boone Isaacs - who spoke passionately about common voices despite differences in opinion and how we should cherish our freedom of expression. There was a reference to persecution for your art – a veiled political statement along the lines of Je Suis Charlie, without saying something to cause ructions. Very well said.

Most definitely the performance of Glory from Selma by John Legend and Common. Which incidentally earned a standing ovation and moved David Oyelowo to tears as well as picking up the Oscar for best song. This highlights how criminal it was that Selma was so overlooked in this year’s nominations.

12 Bizarro Moment to Talk about

Lady Gaga ‘s tribute to The Sound of Music (dressed as an alpine mountain?) It seemed so random (other than that the movie is 50 years old this year)! But she more than pulled it off and it was a sweet thing when Julie Andrews walked on stage as the next presenter and was really genuine in her hug with Mother Monster.

Some obvious results , some not so. Will NPH be asked back again? Not if his second half performance was anything to go by. Does he deserve a second chance? Will Wes Anderson ever get an Oscar? Three times nominated for Original Screenplay and still no award. Will we see Michael Keaton in a blockbuster after Birdman’s success? What will next year’s ceremony bring?

Do you think the 87th Oscars was worth 3 hours of television time?