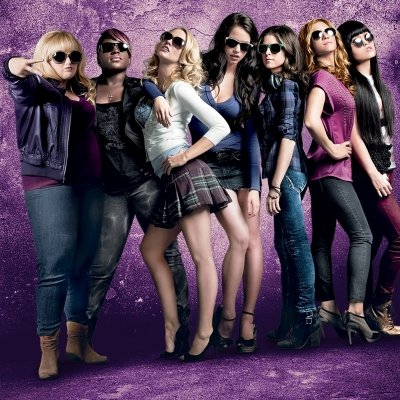 It's safe to say that the "Cups" song (aside from Fat Amy's hilarious quotes) is the most famous part of the movie. Turns out, it wasn't even supposed to be in the movie! “Originally that scene was going to be like ‘I’m a Little Tea Cup’ or something," Anna said. "It was supposed to be weird and funny and the second that they saw me do that [Cups song], they were like, ‘OK. That’s your audition song.’” We've all come to LOVE that song! Can you imagine the movie without it? This is just one of the cool facts about Pitch Perfect.

Adam, who played Bumper in Pitch Perfect, is actually dating a professional a cappella singer! She was even in the movie with him! Kelley Jakle (who played Jessica in the film) was a contestant on "The Sing Off"! How awesome is that?! I wonder if the two ever break out in song when they're hanging out. LOL!

Remember that pretty iconic scene when Bumper throws a burrito at Fat Amy?! Well, you can already imagine how funny those outtakes must have been. When Adam Devine was doing press for the movie, he admitted that he accidentally hit the cameraman right in the face! “Yeah, it was when I was supposed to throw a burrito at Rebel, and he said to aim for him, thinking I wouldn’t hit him, and I pegged him right in the face,” says Adam.

Whenever Anna was singing alone in the film, she was doing it live on set. That includes the scene where she performs the "Cups" song and the bathroom scene where she sings "Titanium"! She said she prefers live singing because "something is a little bit lost in the recording studio." I totally respect her for that!

In preparation for the movie, the entire cast was brought down to Baton Rouge a month before filming. They participated in several hours (a day) of dance/singing rehearsals. The producers made sure the whole cast knew everything perfectly! Do you think you would've been able to last in a boot camp like that?!

Believe it or not, 'Fat Amy' was a nickname that Amy Poehler used on herself when she was pregnant. LOL! She was actually even considered for Elizabeth Banks's role. I'm glad she shared that nickname because it was so perfect for the movie!

This is like a hidden gem. If you haven't seen Pitch Perfect's blooper reel, you need to do that NOW! It includes some hilarious cut jokes and some pretty not-so-PG13 language. You'll be cracking up!

Well, there you have it! These are just seven out of many awesome facts about Pitch Perfect. If you're anything like me, you're already counting down the days until the sequel is released. What was your favorite part of the movie? Which fact surprised you the most?