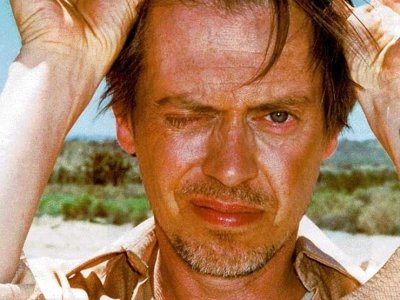 In so many ways, any of the Steve Buscemi performances show you don’t have to be a hot looking guy (in a stereotypical sense) to be a Hollywood star. And star he is, and a much underrated one too in my opinion. His unique characterizations are always memorable, whether he’s making you laugh or making you cry or making you cringe. I love that he has what I call a slightly shambolic look about him yet his acting is sharp and crisp. Here are some of the best Steve Buscemi performances – in my opinion.

Yes, before you say anything. I do agree! This is hardly what you would call a starring role. He played a minor role, for which his name didn’t appear in the credits, but the reason I say this is one of the career-defining Steve Buscemi performances is because it was the first time I saw him. Good looking or not, he is visually striking and give me an immediate impression that I wanted to see more of what he could do. It actually led me to seeking out other films he had been in and even though a good number of them were before The Wedding Singer, I hadn’t seen them. When I watched them – some of which appear in this list – I realized this man is one seriously versatile actor.