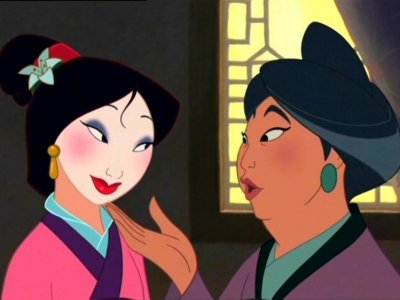 There are some pretty cool fun facts about “Mulan.” Disney fun facts happen to be my speciality, considering I am a huge fan. I find it rejuvenating to learn something new because it makes me look at the film differently when I watch it again. Check out these facts about “Mulan” and see they change your perception of the film.

In the Chinese poem “The Ballad of Mulan,” you learn that Disney's Mulan is actually based on a real-life warrior who fought in China. She disguised herself and fought for twelve long years. She refused any rewards and simply returned home at the end of the war. Both Mulans wanted to take care of their family in their elderly father’s stead. It’s an interesting fun fact about “Mulan” to learn the real story.

You know the famous panting entitled “American Gothic?” Though I wasn’t familiar with the name, I know the picture of a couple in front of their farm, the man holding a pitch-fork and both staring at the artist. An interesting fact about “Mulan” is that two of the ancestors look exactly like the couple from the painting. In fact, those two ancestors worry that their farm will be taken as a result of Mulan’s quest. Ironic? I think not.

Disney likes putting characters from one movie in another. Mulan is no exception. The dog “Little Brother” can be seen in “Tarzan" when the apes shake Professor Porter. A stuffed animal of this character falls out of the Professor’s pocket. What’s more, an advertising poster for the film can be seen on the wall in “Lilo & Sitch.” In “Mulan,” Mushu refers to Mulan as ‘Sleeping Beauty’ when he’s waking her up. The connection there is unquestionable.

The death-toll in “Mulan” far surpasses that of any other Disney movie. Though Mufasa’s death in “The Lion King” was earth-shattering to me as kid, it in no way compares to the amount of blood lost in “Mulan.” It shows the most dead bodies on screen when the army marches towards the Tun Shao Pass and the implied death of the soldiers in the avalanche scene.

Take a minute to think about Mulan and Jasmine. Notice anything? Singer Lea Salonga performed for both Princesses during their musical debut in the film. You can especially hear the similarity when listening to “Reflection” and “A Whole New World.”

I like when you play on languages to create puns. Mulan names herself “Ping” when asked by Captain Shang in the camp. Along with her last name which in Chinese custom is used before your first name, her name becomes Fa Ping. In Chinese, that translates to flowerpot. Naming a man “flowerpot” presents the idea of an effeminate man, aka unmanly.

So how did “Mulan” do at the box office? The film made $120 million domestically and $304 internationally in the year of its release. It was ranked 2nd of family films of the year, following “A Bug’s Life.” What’s more, it was the 7th highest of the year overall. The five years it took to make “Mulan” really paid off.

I hope you learned a new fun fact or two about Disney’s “Mulan.” Who is your favorite character? What did you find most interesting?