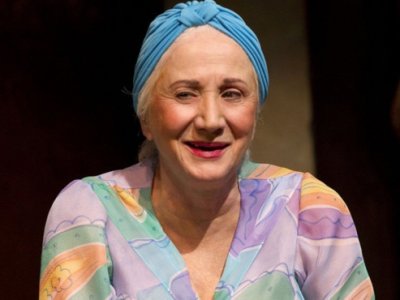 Gorgeous actresses come in all ages, shapes, sizes, colors, and genres, but have you ever noticed the tendency to kind of forget actresses once they reach a certain age? That's such a shame, because there are so many older actresses who quite frankly only get better with age. They're aging gracefully, flawlessly, and graciously, and as a result many of them are just as beautiful as, if not more beautiful than, they were when they were younger. It's hard to limit the list, but here are some of my favorite gorgeous film stars who get even more fabulous as they get older.

Unquestionably, Meryl Streep is one of the most gorgeous actresses who has ever lived. She's also one of the most amazingly talented, and I don't think she's ever been in a single film I don't love. From Sophie's Choice to Death Becomes Her to The Devil Wears Prada, she is sheer perfection. Plus, she shows no signs of slowing down, as evidenced by her recent portrayal of Margaret Thatcher in The Iron Lady. As seen in Mamma Mia!, she's also not afraid to have fun – or to be seen in a far more natural light. The good news is that she's got a ton of new movies coming out as well, so prepare for a big dose of marvelous Meryl!

Helen Mirren is more than just a fabulous older actress, she's practically a goddess. I mean, how many women could have kicked so much ass at playing Queen Elizabeth II? She was practically the only thing worth watching in the remake of Arthur, as well. Those across the pond have long known how awesome she is, and now folks stateside are getting tastes of her impeccable talent and her timeless beauty. Go Helen!

I'll be honest: I actually had Angela Bassett in this slot, but frankly, since she looks better at her age than most of us do in our 20s, and since she's not really old enough yet to even be considered “older,” I went with Kathy Bates instead. I had another motivation for doing this as well: she's no skinny actress! However, she's still a lovely, lovely woman, made even more beautiful by her self confidence and her ability to take on roles that many older stars would no doubt refused, since she's not known for playing glamor girls. I love Kathy!

No list of beautiful actresses who get better with age would be complete without Betty White. She's been big since long before I was born, but she's so awesome that she was able to draw me into shows like “The Mary Tyler Moore Show” and “Golden Girls,” not to mention scores of others. She's showing no signs of stopping either, and in her fabulous old age has developed her “devil may care” attitude even more. She does what she wants and stands up for what she believes in, and she doesn't care if you like it or not!

Shirley MacLaine is one of my favorite older actresses, another absolute goddess who deserves to have her praises shouted until the cows come home … or something. I love her in roles like Ouiser from Steel Magnolias; she does crusty and sarcastic better than any actress I've ever seen. Check out films like Terms of Endearment and Postcards from the Edge – and some of her earlier films, this lady has always been a fox! And according to her IMDb page, we'll be able to see her lots more in the future!

For this one, I had to choose between Diane Keaton and Sally Field, who helped make me fall in love with “Brothers and Sisters.” I went with Diane though, because she's just … she is so full of awesome sauce. Once upon a time she was Woody Allen's muse, and I for one hope he sees her today and kicks himself hard for always having a tendency to trade in for younger models. Diane is eclectic, one of a kind, and ten levels of beautiful no matter what she's doing.

Honestly, Olympia is one of the most amazing older, gorgeous actresses in the whole world. I didn't realize this, but she grew up in Lowell, MA – she's practically my neighbor! I loved her in Steel Magnolias as well, not to mention all of the Look Who's Talking movies – in fact, she was the only reason I watched the second two. I'd love to see her in another movie with Shirley. I would also love to sit down and have coffee with her, because I have a feeling she might live by the quote, “If you don't have anything nice to say about anybody, come sit by me,” even though she said it as Clairee.

For those of you who only know Maggie Smith from Harry Potter, you need to see some of her other films now! She is amazing, and she doesn't show any signs of stopping either. Thank goodness! Scope her in The First Wives Club if you enjoy hearing her acid tongue, and don't forget “Downtown Abbey.” Oh, this woman! I'd kill to have bone structure like hers – and her wit!

These older but still gorgeous actresses are talented, gracious, elegant, and just generally marvelous. Meryl Streep is basically my inspiration for getting older, second only to my mom. And of course, there are so many other fabulous women – Angela Bassett, Glenn Close, Phylicia Rashad, Sally Field – these are just my personal favorites. Please let me know yours! Because really, it's so important to celebrate getting older, to embrace it; it just doesn't do to throw actresses away once they start getting older! Would you love it if Hollywood started casting more older actresses in more movies?