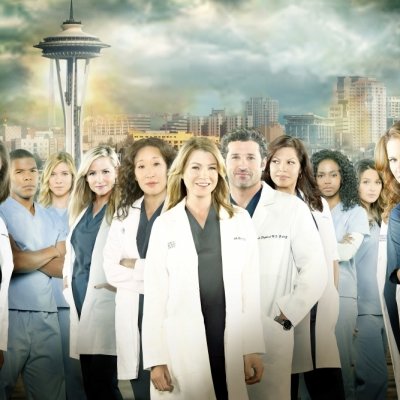 One very memorable moment from the Grey's Anatomy season finale was the plot itself. The explosion at the mall had me biting my nails throughout the entire episode! The fact that Cristina had planned on going to the mall meant that this episode could've ended so differently. Can you imagine if something had happened to Cristina?!

If there's one thing Cristina's taught us, it's that when in doubt, dance it out. That's what she did with Meredith with their final dance session. The two jammed out to Tegan and Sara's "Where Does the Good Go" and let all their worries go away! I think Cristina's on to something here. Dance parties are the new way to relieve stress!

For a few minutes, I allowed myself to believe that Cristina wasn't really leaving. Unfortunately, that wasn't the case. Her goodbye (although it had no words) with Dr. Hunt actually brought tears to my eyes! When she said goodbye to Webber and Bailey, it made me so happy that Shane had decided to follow her. That meant she wouldn't be alone!

This was a pretty big deal. Before leaving, Cristina gave Meredith some advice about whether or not she should follow Derek to Washington. “He’s very dreamy,” Cristina acknowledges. “But he’s not the sun. You are.” After that, Meredith made up her mind. She refused to be the "trailing spouse" and made it clear to Derek that she would not be going anywhere.

I don't know about you, but April and Jackson's relationship is my favorite thing about Grey's Anatomy. I'm glad they're finally on the same page about their baby! With all the madness in the episode, April might've had a little meltdown. She couldn't imagine bringing a baby into a world where there were so many dangerous situations. But, surprisingly, Jackson's mom is the one to calm her down. I love what she told her, “This is the way the world changes, good people raising their babies right.”

With Cristina out of the hospital, her seat on the Board was up for grabs! Webber told Bailey he had recommended her to be Cristina's replacement and she was ecstatic about it. She planned to "make real change" with her new position. However, by the end of the episode, Alex learns that Cristina left him everything - her seat on the board and her shares of the hospital. Can you imagine the Karev vs. Bailey battle that's gonna go on next season?!

Did anyone see this coming?! I sure didn't. Turns out the new Head of Cardio was there for a very specific reason. Her birth mother was none other than Ellis Grey. Yup. Richard's the father, which means season 11 has a lot of explaining to do! Remember when Shonda sprang Lexi Grey on us?! Let's hope we love this new doctor just as much as we loved Lexi!

Well, there you have it! These are just some of the memorable moments from the season 10 finale of Grey's Anatomy. If there's one thing we can count on from Shonda Rhimes, it's the mind-blowing finales every season. What part did you think was the most memorable?