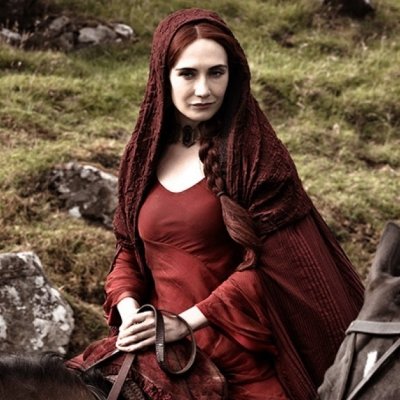 One of my favorite female characters in Game of Thrones is the warrior Brienne of Tarth. Although it can be a bit annoying that she's portrayed as unfeminine and therefore unattractive (Gwendoline Christie can actually look rather beautiful), she's definitely an interesting character, who refuses to adopt the traditional role expected of her as a noble and as a woman.

Cersei may not be a remotely likable character, but she's certainly a memorable one. Willing to do anything to keep her son on the throne, Cersei is a thoroughly ruthless woman. As her brother Tyrion points out, her one redeeming feature is that she loves her children. Unfortunately one of them is the loathsome Joffrey, so we don't agree with her.

Lady Olenna is somewhat like a more agreeable version of Cersei, in that she's also rather ruthless and willing to scheme. However, you find yourself more on Olenna's side, especially after what she does in Season 4 (I won't spoil it for anyone who hasn't yet caught up). It will be interesting to see how much Margaery develops to resemble her grandmother.

Daenerys started off as a rather wet character, yet over the course of the first season began to show a tougher side. The scared girl of the first episodes has matured into a woman every bit as ruthless as Cersei or Lady Olenna. And who wouldn't root for the Mother of Dragons? Will she regain the Iron Throne? Well, we can be sure that she'll give it all she's got …

I'd like to see Arya come under the wing of Brienne, as she's something like a mini-me with her unusual (for a girl) interest in fighting. Arya is a much more interesting character than her soppy sister Sansa (how long did it take Sansa to realise that Joffrey wasn't actually Prince Charming?).

Given the world that the characters of Game of Thrones live in, you have to be pretty ruthless to survive. Osha may not be one of the major characters, but I like her spirit and willingness to do what she has to do (including sleep with Theon … that's above and beyond the call of duty). You don't mess with someone like Osha!

Finally, I'm rather fond of Melisandre's appearances; she's another strong female character, even if she is the 'baddie' (actually, the baddies can often be more interesting). You have to suspect that she'll always have the real power where Stannis is concerned. I'm also looking forward to her future encounter with Arya, as Melisandre prophesied in Season 3 …

The women in the show may not do much physical fighting (with a few honorable exceptions), but in many ways they are far from passive. They're often devious and intelligent, and the show wouldn't be half as interesting without them. Who is your favorite female character in the series?