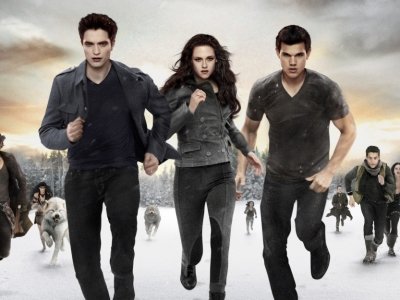 If you’re an avid book reader like I am, then you probably look for the movies that are just as good as the book you read. Some movie makers do a fabulous job at recreating the book in a whole new way or even follow the plot word for word. Although we all love when the movie follows the book, sometimes the movies that are just as good as the book take on a different view of the book or focus more on a specific part while leaving out other parts. Either way, in the movies I'm including, the movie makers did a wonderful job of capturing the most important aspects of the books and the resulting movies were overall just as interesting and creative as the book, itself.

The Hobbit, a fantasy novel by J. R. R. Tolkien, is a classic adventure tale that follows the lovable and rather strange looking Bilbo Baggins who is indeed “The Hobbit.” Tolkien wrote with a creative yet humorous touch on every page which was mirrored in the awe-striking movie, The Hobbit: An Unexpected Journey, directed by Peter Jackson, released in 2012. I remember as I sat in the movie theater late at night how much of the movie I remembered reading in the book and how similar the director’s interpretation was compared to my own. I especially loved how Jackson included the sleepy song the dwarves sing before they leave for their journey. Overall, this is definitely one of the best movies that are just as good as the book!

The Hunger Games, directed by Gary Ross, was based on the book of the same name written by Suzanne Collins. Besides having unbelievably attractive and talented actors including the fabulous Jennifer Lawrence, the lovable Josh Hutchinson, and the jaw-dropping Liam Hemsworth, the movie also followed the plot line created by Collins incredibly accurately. Omitting less important aspects of the book, including Madge, Ross focused on the main parts of the story and paid special attention to the relationships between the three main characters and the impression the audience would receive of the Capitol and President Snow. By focusing on the big picture, Ross created a movie that stayed true to the nature and plotline of the story while also conveying the major message of the book in a spectacular, visual experience.

I absolutely had to include the most successful movie series of all time in this list! The series consists of eight movies that are based upon the seven-book series written by J.K. Rowling. Rowling’s sophisticated yet daring writing is captured perfectly in all eight movies allowing us to experience everything that Harry (played by Daniel Radcliffe) and his friends Hermione and Ron ( played by Emma Watson and Rupert Grint) go through on their journeys through Hogwarts and their ultimate fight against the figure of all evil, Voldemort. Although the movies couldn’t possibly capture every event that occurred in the books, the four directors that worked on the movies and the amazing actors were able to capture the personalities and relationships of the characters that allowed the fans to connect and relate to them easily. The books and then the movies impacted my friends and I so much when we were younger that we based most of our make-believe games on them! Not only did the books make this possible but the movies allowed a visual that helped us fans get a wonderful interpretation of the now, classic books.

4 The Secret Life of Bees

Another notable interpretation of a heart-warming book is The Secret Life of Bees, directed by Gina Prince-Bythewood. I actually ended up watching the movie before I read the book by Sue Monk-Kidd and even though I usually try to read the book first, I was really glad I switched it around this time! The director’s visual interpretation of the book followed so closely to the original plotline that I was actually able to understand the book so much better that I had already seen the movie. Although some portions of the book were left out or altered, all of the emotion and feeling was undeniably present throughout the movie and left me in tears by the end!

Another tear-jerker, Tate Taylor created such a beautiful representation of the book, The Help, written by Kathryn Stocket that it actually had my entire family crying at multiple parts just as I did as I read the book. Some will argue that many changes were made shifting from the book to the movie, however the racial struggle between the upper class ladies of the American South in the early ‘60s and “the help” is made that much more distinct in the movie which I personally believe strengthened the overall message. However, I would have loved to see some of the characters that are well described in the books, have a bigger appearance and a more accurate representation in the movie!

6 To Kill a Mockingbird

Going back about fifty years, Robert Mulligan’s adaptation of To Kill a Mockingbird, by Harper Lee, left me spellbound by the end of the movie. And as my tenth grade, American Literature teacher flicked the lights back on, I had to pull myself out of the spell of suspense and emotion I was captured in during the movie. Of course I had read this amazing book beforehand, however seeing it in front of me, even in black and white, had a profound effect on me. It was just as enjoyable as the book and while I was more connected with Scout during the book, I actually became very connected with Atticus during the movie. If you haven’t read the book yet, I would definitely recommend seeing the movie along with it!

I remember the very first time I saw the movie Forrest Gump, directed by Robert Zemeckis, and I specifically recall asking my mother why she was making me watch such a silly movie. I was young when I first saw it and now that I have watched it over and over again as I’m getting older, I’m finally understanding the beauty of compassion that my mother was trying to teach me through this movie. Although the ending still makes me cry and I wouldn’t change it for the world, I was intrigued to learn that the book is very different than the movie and actually had a very different ending too! I won’t throw out any spoilers here in case you want to read it, but I’ll just add that you may be very surprised!

I began reading the Notebook, by Nicholas Sparks, last year sometime and finished it in a matter of days because it was just that good. It seemed like everyone around me had seen the movie at least once and I decided to give it a watch. And I am so glad I did. I will not go as far to say that the movie was better than the book because I am naturally inclined to like a book over a movie, however, I will say that the movie made me feel just as many emotions for the star-crossed lovers as the book did. The movie stayed true to the majority of the plot and all of the tear-evoking emotions. From the tear stains in the pages of the books, to the tear stains across my pillow as I watched the movie, I don’t think I ever cried so much over one story!

I definitely couldn’t forget about all of my fellow vampire- romance lovers out there in this movie list! When I was about to read the first Twilight book by Stephenie Meyer, I wasn’t too sure about it until I got about half way through. That’s when I really started to get interested in the plot line. I was so happy that I read it by the end and was even happier when the first movie came out! I thought that the actors were placed perfectly to the characters in the book and Catharine Hardwicke did a very commendable job in grasping the essence of this romantic fantasy. And it seemed like these movies grasped the attention of all of the teenage girls around the world too!

Many times, book lovers fear that the movie couldn’t possibly match up to the book that they fell in love with. However, sometimes the film makers go above and beyond the call to make their interpretation of the book the best it can be! These were just a few of some of the movies that had a lasting impression on me just as the books they were based on did. What are some of your favorite movies that are just as good as the book?