7 Reasons to Be Excited about ABCs Resurrection ... 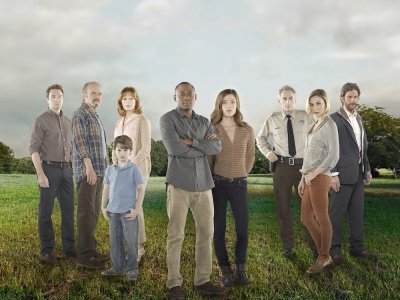 ABC's Resurrection gives me the heebie-jeebies, and I love that. You'll never hear me say that I don't watch a lot of TV; I watch TV all the time. I don't always watch good TV, granted, and you might be tempted to question my choices here, as well, since a lot of critics are calling ABC's Resurrection a cut-rate, Americanized version of The Returned (although Resurrection is based on The Returned, by Jason Mott, while Les Revenants is based on a movie – yes? I think), but bear with me. You should be excited about this show, if you like being creeped out and having your imagination tickled. You might totally disagree with me, and that's cool. But if you walk away from this feeling at least a little bit intrigued, then on Sundays, somewhere out there, we'll be watching the same creepshow.

The cast is one of the reasons I initially tuned into ABC's Resurrection. Foreman was one of my least favorite House characters, but I miss House desperately and I like Omar Epps as an actor, so there was nostalgia value. And I adore Kurtwood Smith, who's wonderful at doing drama – don't judge him based on his turn as Forman, in That '70s Show. The rest of the cast is quite solid, although I haven't yet decided if I like them all yet.

In a show like this, you naturally run into things that cause you to suspend belief. I'm happy to report, without sharing too many spoilers, that there's a lot of disbelief in this show. The inhabitants of this strange little Missouri town don't fall all over themselves to believe in the miracle of the resurrection, and to me that's refreshing. I don't want happily ever after and rainbow farts.

3 It's Sort of Stephen King Inspired

Stephen King didn't write this and it doesn't really rip off any of his books, although some critics also liken it to Under the Dome. No, my point here is that it seems like something Stephen King could've written about, and it's delivered in just that kind of creepy, haunting way. As a King fan, that appeals to me. If you hate him or can't stand his books, you may not like Resurrection.

4 But without the Pet Sematary Connotations

That being said, it's not a Pet Sematary ripoff. There are, thus far, no soiled, sacred burial grounds. As yet, no one has purposely tried to bring anyone back from the dead. I'm almost waiting for that, however, and I'm not sure whether I'll love it or hate it if it happens. Time will tell, I suppose.

So there are no evil children or cats bent on senseless killing, and that's awesome. So far (again), there don't seem to be any demon possessions going on with any of the resurrected townspeople. Furthermore, there are no zombies, and that makes me happy. I get all the zombies I'll ever need in The Walking Dead – and frankly I only enjoy zombies when Norman Reedus is also involved.

6 There's Always More to the Story

There's a story here, though, and that's a must for me. I want something that makes me wonder and think. That's why Scandal recently left me sobbing my guts out. I have no idea what's happening with Resurrection as of the writing of this post; I don't know why this town is special, why these people are coming back, and if there's any rhyme or reason to it – but I know that, as long as it doesn't suffer a mid-season cancellation, I will find out, and for now that's enough to keep me watching.

7 It's Kind of Hopeful

I know that none of my loved ones are going to reappear suddenly. However, the idea of it is kind of hopeful and sweet. There's a definite hopefulness in this show, in spite of the somewhat morbid subject matter. You want to believe that everything's going to turn out all right, and all these heartbroken people are going to get a second chance with their loved ones. But will they? Will they really?

Not everyone will enjoy ABC's Resurrection, and for all I know, it's going to get canceled before we figure out what the eff is going on – that happens a lot. For what it is and for what it's worth, however, I think it's an interesting concept. Granted, I haven't gotten into The Return, so I could be way off base. I like this show, though. It makes me think. What do YOU think, though? Have you given this a chance, or do you think you might?