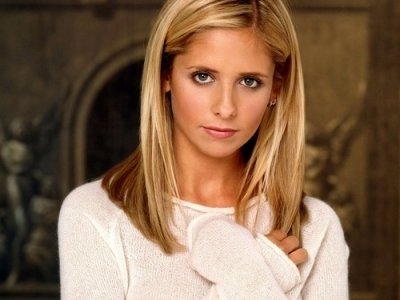 1. She's the One Chasing the Monsters

One of my biggest reasons for why Buffy Summers is the best. How cool was it that the 'Chosen One,' the only one with the strength to hold back the dark, etc etc, was a woman?! It's nearly always - especially when the programme first came out - the monsters chasing the woman. But not Buffy!

I can't think of a single episode where she plays the damsel in distress role, despite the fact that she often needed help. Do you remember the episode where a watcher's test caused her to temporarily lose her powers? She STILL beat the crazy, scary vampire and saved the day.

One of things that makes Buffy such a loved character is the fact that she makes mistakes and she messes up. She's a superhero living in a world filled with monsters and demons, yet Whedon made it so we could still identify with her and with her problems - and still like her, too. Now THAT is a strong character.

4. It's Always about Her

She has a series of boyfriends throughout the programme - Angel, of course, Riley and Spike (the biggest crush of my teenage years). But it's always about Buffy; in ten plus years on screen, the men in her life are always the supporting characters, never the lead.

As I mentioned, she's a superhero - but sometimes she can't cope and the things she can't cope with don't tend to be the things that go bump in the night. Whether it's money trouble, family issues or career woe, her problems are real problems we all have.

6. It Isn't about Physical Strength

When you talk about a 'strong female lead,' it's easy to miss the point. A strong female lead is a strongly-written character. It isn't about physical strength, it's about inner strength. It always is.

One of the best parts of the series - the amazing friendship between Buffy, Xander and Willow. Strong friendships seem to make up a big part of lots of our most popular TV series - look at SATC. The trio's friendship was a constant, overriding theme throughout all seven series and it made her seem so much more human than she would have been otherwise. Also, having a gay woman as one of the lead roles - another example of how far ahead of its time the show actually was.

So there you have it - 7 reasons why Buffy is one of my fictional heroes. All credit to Joss Whedon for always writing female characters that are strong (in all senses of the word), funny, independent and relatable women. Who's your favourite fictional woman?