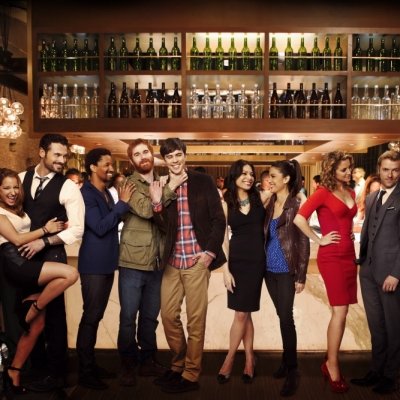 There are so many reasons why Mixology shouldn't have been canceled. It aired on ABC but only lasted one season which amounted to thirteen episodes. I heard many good things about the show so when I finally checked it out on Netflix, I totally became obsessed with it. I got so invested with the characters which made it so sad to know there won't be another season! Check out some of the reasons why Mixology shouldn't have been canceled.

This show chronicled the exploits of different singles, five men and five women. They're all on the search for love and the night takes them on some pretty wacky adventures. The entire season (13 episodes) happens in ONE night at the bar. I think that's awesome because every episode starts off RIGHT where the last one ended. Each episode focused on a different couple, showing you different point of views. The plot is just one of the reasons why Mixology shouldn't have been canceled; it was such a cool concept!

The three main guys, Tom, Cal, and Bruce are all at the bar together. They joke around, support each other, and play wingmen for one another whenever necessary. Tom, who was newly-single, was like a lost puppy dog in the big ol' city. Cal and Bruce helped him find his confidence again and approach women. I loved their bromance!

Ladies, this show is jam packed with beautiful men. Of course, since the plot takes place in a bar, what would the show be without a handsome bartender? That's Dominic and he was one of my favorite characters. Ron, the British business man is a total dreamboat while Cal, Bruce, and Tom are all quirky and cute. There's definitely something for everyone!

Pretty much every episode of this show has a laugh-out-loud moment. Bruce, the comedy genius, is always talking nonsense. Watching him trying to flirt with Jessica (and failing miserably) was super funny!

What I really loved about this show was its realness. It depicts what truly happens on a night out at the bar. I think there are so many moments that the audience can relate to including blind dates, weird drink orders, dress disasters, etc.

6. We Need to Know What Happened Next

Although the show ended on a happy note, I need to know more! In fact, I need to know everything. Did the couples stay together? Did Cal eventually propose to Kacey? Come on, ABC, how can you leave us all hanging like that?! Let's start a petition for another season, one with all the answers.. LOL!

Even though there were many adorable couples in the show, Tom and Maya had to be my ultimate favorite. They were total opposites and somehow, they were perfect for each other. Maya made Tom realize that he had to fight for what he wanted and, at the same time, Tom made Maya realize that she didn't HAVE to fight all the time. She could be with someone she actually cared for, like Tom.

Well, there you have it. These are just seven out of many awesome reasons why Mixology shouldn't have been canceled. There's still so many questions that I need answers to! P.S you can stream the show on Netflix if you want. What was your favorite thing about the show?