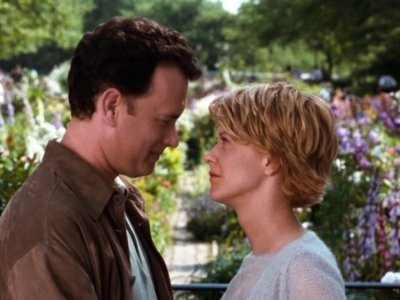 This may be a biased opinion, but You’ve Got Mail is one of the greatest romantic comedies of all-time. I’m not just saying that because I could watch it once a week for the rest of my life and not get sick of it, but also because it’s just that amazing. It’s the movie that you want to watch on a girls-night-in with your best friends and it’s also the movie that you want to watch by yourself to fully experience (or cry, whichever). It’s hard to find someone who doesn’t love You’ve Got Mail, but if you are one of those people, you shouldn’t be. You’ve Got Mail should be everyone’s favorite romantic comedy, at least in my opinion.

I don’t think You’ve Got Mail could’ve had two better romantic leads. This was their third movie together, and unarguably their best. I’m all for Sleepless in Seattle, but it doesn’t hold a candle to You’ve Got Mail. The third time’s a charm with these two (even though the first two were pretty great, too) because they definitely nailed it this time with their amazing portrayals of Joe Fox and Kathleen Kelly.

Nora Ephron definitely made this movie what it was by acting as writer, director, and producer. The whole movie screams Nora Ephron, but it’s especially apparent in the writing. This movie really encompasses everything that’s so amazing about her work.

Although it’s definitely not the most accurate portrayal of one of the greatest cities in the world, You’ve Got Mail has inspired more than a few people to move to New York. It’s glorified and romanticized, but in the best way possible. After seeing this movie, you probably either fell in love with Tom Hanks, New York, or a little bit of both.

Online romance is almost completely devoid of romance these days. Go back sixteen years, though, and it’s a whole new story. Watching an online romance was enchanting and almost magical in 1998. In 2014, though, it’s a whole other story. “Catfishing” is a very real possibility that probably didn’t even get a second thought when You’ve Got Mail was made. It was a simpler time.

5. The Emphasis on Books

One of the greatest parts of this movie is the emphasis on reading and books. Obviously it plays a large part in the movie, being both of the main characters’ careers, but listening to Kathleen Kelly talk about her love of books is enough to make any reading nerd’s heart beat a little faster.

6. The Essays within the Movie

Nora Ephron has said it herself; she was an essayist first and foremost. Her essays are unparalleled, and she managed to work a few into the script in email form. It’s still so unique and unheard of, even sixteen years later. Tom Hanks talking about bouquets of sharpened pencils and Starbucks orders is what truly makes this movie the classic that it is.

7. The Hatred That Turns to Friendship

There are few greater plotlines for a romantic comedy then the “hatred turns to friendship turns to more” story, and it’s beautifully done in this movie. It’s one of the only times that we’ve seen this done believably in a film, especially in a romantic comedy.

You’ve Got Mail is such a simple romantic comedy. There’s no accidental sleeping together that leads to a falling out which eventually ends with them together. There’s nothing too dramatic about their relationship. The movie ends with a simple kiss in Riverside Park, there’s no drama, and it’s just simple. If only real life were so easy.

You’ve Got Mail is undoubtedly a bona fide romantic comedy classic. Ask any woman between the ages of twelve and sixty and they will probably sing their praises of this movie.

Do you love You’ve Got Mail? What’s your favorite part? I love the email exchanges between Kathleen Kelly and Joe Fox, but then again, I love everything about this movie!