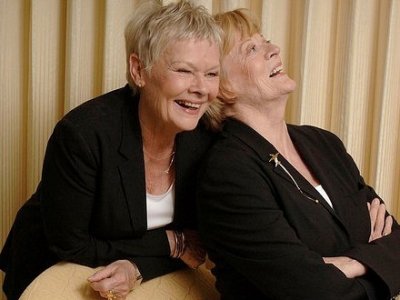 British leading ladies have poise, eloquence, elegance, and amazing amounts of talent. Some of them are up and coming, bright young things who are lighting up screens both in the UK and in the US. Others have been around for years, but their own stars show no signs of dimming, either. I adore British actresses, because they so often have that signature dry wit, they know how to deliver a verbal blow with the best of them, and they are unquestionably charming while they do so. Take a look at these fabulous British film stars and see what you think – and don't be afraid to share your own!

Helena Bonham Carter is one of my favorite leading ladies, although she tends to star in more eclectic, eccentric films. Actually, that's the very reason I love her so much. Her beauty is incredibly unique, as are her wit and sense of humor, and she brings a definite flavor to any movie in which she stars. Naturally, I love her in Tim Burton movies, where she's so often a leading lady, but even when she's playing more minimal but still important roles – like in Harry Potter! – she's absolutely lovely.

I just realized how many of my favorite British actresses starred in Harry Potter... I'm not sure if that's on purpose, since I love those movies, a coincidence, or just a natural occurrence, considering how many stellar actresses played in the franchise. Of them all, Maggie Smith is tops. This woman is amazing, and as I mentioned in another post, if you haven't seen her other, and earlier, works, you need to do so post haste. She's much, much more than just a Hogwarts professor, and once you've seen her when she was younger, you'll understand why she's such a beautiful older woman.

As it happens, Emma Thompson is another veteran HP cast member, but those films are the least of her accomplishments. You haven't seen anything until you've seen her do Shakespeare; she was a dream in Sense and Sensibility, with another actress on this list. She's also amazing to watch alongside Kenneth Branagh; to me, that team is even more stellar than Taylor and Burton. She can do comedy just as easily as drama, and in both cases her acting is impeccable.

I'm not sure when she stole everyone's heart – probably as Rose in Titanic. However, she's starred in so many other amazing films, it's no wonder she's one of the most well loved British leading ladies at such a relatively young age. Beautiful Creates, Revolutionary Road, The Reader, Eternal Sunshine of the Spotless Mind – her triumphs are too numerous to list and her beauty only increases with age. She's also totally confident in herself and in every curve on her body, and you simply can't beat that!

Helen is the quintessential British actress. She's like an institution. This woman is incredible and she has no intentions of slowing down. She does serious, dramatic roles amazingly, but it's wonderful to see her in comedies as well. Needless to say, she's also one of those amazing actresses who only gets better with age!

Emily is one of my favorite up and coming stars, and has been since I first spotted her in The Devil Wears Prada. She's getting more and more starring roles now, so you can better see all her facets. Sometimes she's bitchy and snarky, sometimes she's dark and dramatic, and sometimes she's wonderfully funny and lighthearted. At all times, however, she's gracious and gorgeous and seriously talented!

No list of British leading ladies would be complete without mentioning the biggest British leading lady: Dame Judi Dench! This woman should be an inspiration to us all. She is stunningly beautiful, strong, smart, funny, talented, and determined. Every woman could and should take a page out of her book – that's why she's got such a reputation for playing equally strong characters. Iris, by the way, is one of my favorites, and she's flawless in The Importance of Being Earnest, among many, many others.

I absolutely love watching movies featuring these British leading ladies, and it looks like we'll all be able to enjoy their talents for years to come. Something about the quintessential British sense of humor has always appealed to me, and these women exhibit with grace, charm, and elegance – what could be better? Who are some of your favorite British film stars, male or female, and why do you love them so?