The Last Empress of Fashion ... 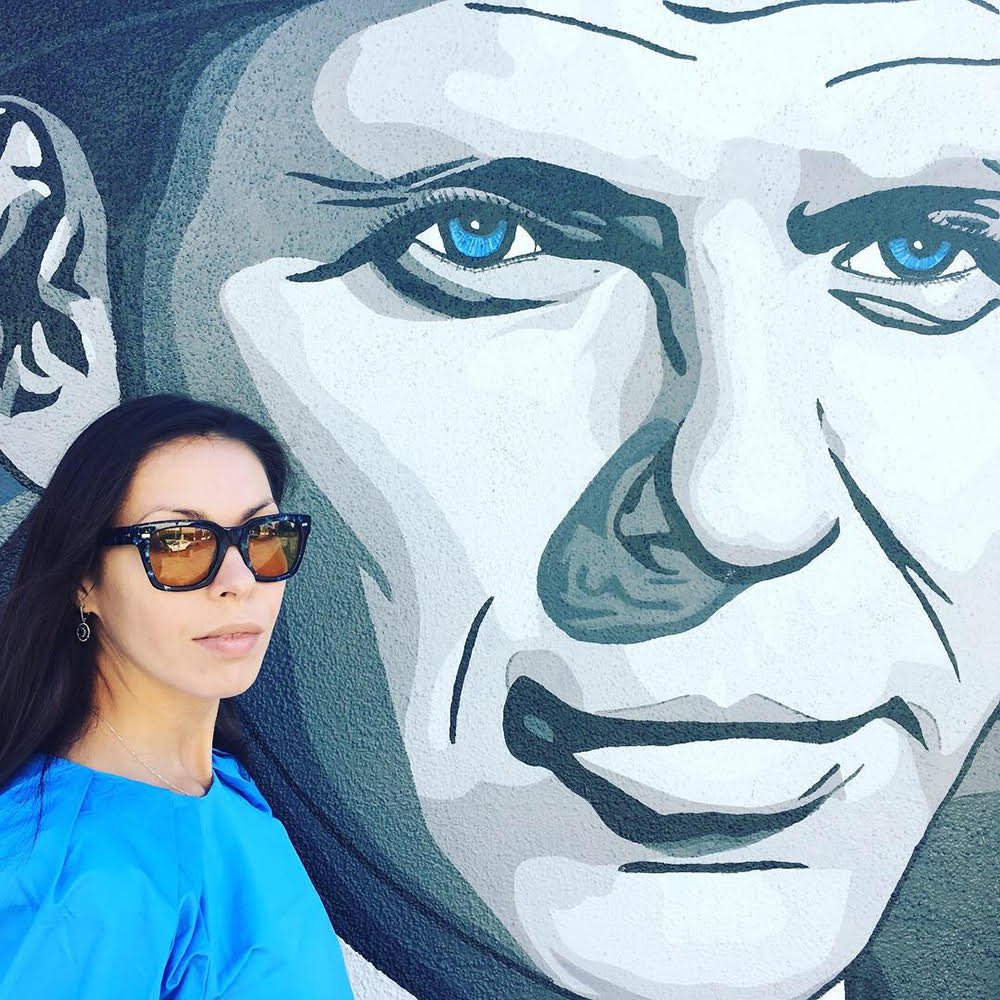 Dear readers, we have something so very new and exciting to share with you. Allwomenstalk is very proud to be supporting a movie called The Last Empress of Fashion, and today we have an exclusive interview with the director Gala Pawl.

The movie/documentary is about Mila Anufrieva – a woman with a unique life path, and whose story deserves to be made known. We’re not going to give away spoilers but let’s just say this remarkable woman built a $100M luxury fashion empire, battled cancer, survived a KGB plot to kill her, fled to Italy to rebuild her career, and achieved even greater success than previously.
Let’s learn more about Mila and the making of this film from Gala:

1 Why Was This Story so Inspiring for You to Want to Make It a Film?

It is very easy to lose oneself when you face troubles - especially when problems hit you one after another. Every time I hear a story of a person who stands up after each fall, I feel inspired: be it a man, a woman, a cancer survivor or a person who got out of poverty, neglect or betrayal. Because as a human I do need great examples of people who made it.

That is why when I got to know the story of Mila, I felt that all the world needs to know about this fascinating woman: both as the one who has a Cinderella type of life and as a self-made role model type of woman I would personally like to be. You can rarely hear the stories of people who give away that much of themselves: after all the tragedies, all the darkness she still is a ray of light with so much positive impact on the world that I felt it would be a crime not to let everyone in the world to know about Mila.

As a businesswoman, I myself had the hard times and I know how much your family helps you when everything goes bad. Mila had to fight most of the time by herself - and it makes her achievements a deed.

Cancer touched my family as well and I know that when it comes you need any success story, any news that gives you the hope and the energy to never give up. Mila fought cancer when everybody had told her she had no chances to win. And I know by heart that every cancer warrior in the world needs to hear this story and get to know that when you get a 99% chance to die, you must read it as a 1% chance to win - and go for it by any means possible.

In general, the main thing that inspires me in this story is that Mila is a one-of-us type of woman: her family was an ordinary one, with no million-dollar accounts or useful connections to make life easier. She was born in the country that never even appeared on the radar of the fashion world. She could be a girl from Ohio or Germany or Mexico or China - the initial location does not matter. What matters is that she did not just have a dream (like all of us do) but made every step possible to achieve everything she dreamed of.

And this is one of the key messages of this story: you can do it against all the odds, so go for it!

2 How Did You Hear about the Heroine?

Mila attracted a lot of attention when she had started to post the story of her life on the Internet. Many people were shocked to know the backstage of the world of High Fashion and of how people take down competitors in the world of retail because from the outside it seems that living and working in luxury industry as the source of easy money, is the eternal holiday with fireworks and sparkles.

So when you know that fashion is a very hard kind of business you really start to wonder how could Mila keep herself an open-minded kind of person who not only survived all the nightmares she had to deal with but shares everything she has with those who need it. A huge part of the story is our times, when Mila personally takes care of over 170 children in Guinea-Bissau - and this part mesmerizes me: it takes a lot of time and energy for me to raise my daughter and I can’t even imagine how much love should a woman have to raise hundreds of orphans who see a mother in her. So I myself decided that I can help Mila in her efforts at least by making this film, raising poverty awareness and attracting extra attention to her charity efforts. I know that there’re a lot of generous and kind people in the world who could definitely help Mila if they knew what deeds she is making on a daily basis.

3 How Does It Feel to Be a Female-oriented Crew (Director/Producer) in Such a Male-oriented Business?

I have been an executive producer for over a decade and I guess I am lucky to say I have not noticed any male-kind-of-pressure in this role, because as a financial analyst I’ve been working with numbers, with budgets and found the ways to make everything better for a lower amount of money. So when it came to finding a professional who could help saving some money on production people usually had not cared if you are a woman or a man - they needed the positive result, which I provided.

But in the creative world, it feels a little bit harder to get noticed as a woman because somehow in case a project needs a director and has two pretty similar professionals to choose from in most cases a man would get hired. Not because producers hate or disrespect women - just because for decades it had been somewhat of a kind of a norm. So, in my executive producing life I tried to hire the talented women as much as possible, and, say, the sound engineer I always work with - Julie - is truly the best one in the world. I did have a whole number of chances to compare her work to the other specialists in the field and she’s really the best. Or my co-producer Sasha Boot - she’s a jack of all trades kind of person, just like a producer must be. And of course, I am thrilled to have Beth Kushnick onboard: she is the best production designer in the world. Every room you’ve seen in The Good Wife / The Good Fight TV series or the set decor in Jumanji, Wanted, National Treasure and many other movies - all this was made by her. So her advice in the field of making the scenes visually amazing is always a gem.

In this project we are 50/50 female/male team: 2 female producers, 2 male - and even though it happened unintentionally I am glad it is so: I am sure that even opposite opinions make any projects stronger. And one should not ever collect an all-female crew or all-male crew on purpose because it would weaken a project.

I feel like it is positively a thrilling time to live and work in as a woman: many film festivals, TV channels, studio representatives start paying attention to female-driven and female-directed projects. It is a bit politicized at the moment, but the vector of development of the industry had changed, and it’s to the better. As an emerging director I applied to NBC's Female Forward program and hold my fingers crossed to get there because the best way to get even more experience is to dive into even bigger projects. But wherever it goes I am sure I will be okay both as a producer and a director. And of course, I will be glad to help out women in the industry - so if you are an amazing editor, color corrector, or a director of photography, or whoever else - feel free to contact me anytime.

4 How Are You Hoping the Film Will Inspire This Generation of Young Women?

I’ve read an amazing news on the Internet about a research that proved that if a girl in your childhood or teenage years knows about at least one female success story she achieves more in life - because she knows that whatever she dreams of is possible, and it gives her the power for all the trials and errors on the path to her goal.

This story is so unique I can hardly breathe as a producer and a director thinking of it: knowing it one could think it is some thriller screenplay written in Hollywood for Charlize Theron or Emily Blunt type of actress to play. So, when you realize it’s all true events and that Mila did manage to overcome every obstacle on her way to where she is now - you just can’t be NOT inspired by this.

Girls get a lot of disappointment in life: we try to find friends who won’t betray us, friends who would be with us not because of how we look or what we achieve but because of who we are deep inside, we do see discrimination and - sometimes - sexism, and so on, and so forth. And now and then each of us feels there’s simply no way to solve a problem this time, and we want to give up and live a simpler life, forget about some 'impossible goals' of ours… Well, Mila’s story proves you should not!

She had seen poverty - and got out of it. She had the KGB on her tail - and managed to deal with it. She had that harsh male competition - and won. She had a stage III cancer - and still fought. She had been betrayed by so many people she thought to be her true friends - but still she stayed a kind and loving woman. She had been separated from her husband and son - but her efforts led to re-uniting with them. And so on, and so forth - you really can use her story of life as the endless source of power whenever you want to give up! Her story inspires, and I want to share it.

I am sure there are a lot of people and companies who would be happy to support my efforts - that’s why I started IndieGoGo campaign at igg.me/at/FilmAboutMila - so that we all could inspire women together.

5 How Can Our Readers Get to See the Film?

The movie will be released in 2019 - I definitely want to make premieres in Los Angeles and Milan, and we will both have ticket giveaways for the screenings and film festival participation news on our film pages. And there’s already a number of distributors from US, Europe, and Asia who are waiting for the rough cut of the film to make the deals in their countries: so, the film must appear on streaming services, TV channels and - we hope - in cinemas around the world.

Thank you, Gala for a fascinating insight.

Allwomenstalk is extremely proud to support this female-driven, female-produced and female-directed film. We’re sure it is going to inspire women everywhere.