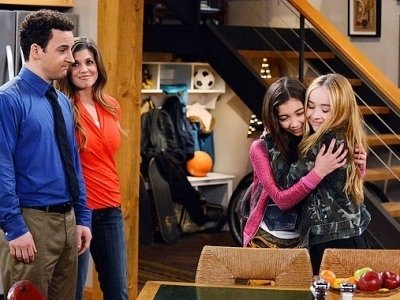 There are so many upcoming TV series to look forward to, and many of them feature familiar faces that are returning to TV. Networks keep ordering pilots starring stars that we love, but this list is just going to focus on series that have already been picked up. Here's a look at some of these upcoming TV series starring beloved actors and actresses that you'll be glad to see on the small screen once more:

This is one of the upcoming TV series getting the most buzz because of its connection to a very popular superhero. "The O.C." star Ben McKenzie is returning to TV to play a young James Gordon in this prequel to Batman's story. We'll get to see what Gotham's commissioner was like as a rookie detective, a role that McKenzie should be comfortable with after playing a cop on "Southland." "Hawthorne" actress Jada Pinkett Smith is also set to star as an all-new character, a villain nightclub owner named Fish Mooney. One of the members of her criminal crew will be the Penguin (Robin Lord Taylor). The show will feature plenty of other familiar characters from the Dark Knight's world, including Alfred (Sean Pertwee) and a young Bruce Wayne (David Mazouz). It will air on Fox sometime this fall.

"Private Practice" star Kate Walsh is set to star as a stripper-turned-trophy wife in this amazing-sounding TV series inspired by the Coen Brothers movie of the same name. The show will feature a different cast of characters from the film, and Kate won't be the only familiar face. Billy Bob Thorton is going to play a baddie named Lorne Malvo, and "Sherlock" star Martin Freeman is going to star as an unlucky insurance salesman who has a run-in with the manipulative man. "Breaking Bad" star Bob Odenkirk and "The Good Guys" actor Colin Hanks will play cops, while "It's Always Sunny in Philadelphia" actor Glenn Howerton will be a personal trainer. "The Big C" star Oliver Platt will star as the "Supermarket King of Minnesota." The cast is incredible, but hopefully the show will be just as darkly comedic as the Coen brothers' classic movie. It airs on FX on April 15.

Ben Savage and Danielle Fishel are reprising their roles as Cory and Topanga in this highly-anticipated Disney Channel series. The beloved couple now has a daughter named Riley (Rowan Blanchard) who is in the 7th grade. Since the show is on the Disney Channel, it's obviously going to be more about Riley, but surely her parents will have plenty of advice to give her on how to survive those awkward teenage years. Expect to see other familiar faces from "Boy Meets World" pop up occasionally. "Glee" star Jane Lynch has also confirmed that she's going to guest star on the show. There's no premiere date for the series yet, but it will probably air sometime later this year.

If you miss "Happy Endings," you'll be glad to know that Eliza Coupe is the latest member of the cast returning to TV. In this USA Network comedy, she'll be playing a corporate attorney named Nina who becomes a public defender after a nervous breakdown. Hopefully this new character will be a competitive control freak just like Jane. "Better Off Ted" actor Jay Harrington will star as Nina's sexy-but-scruffy new colleague. There's not a premiere date yet.

"Once Upon a Time" actress JoAnna Garcia is trading Prince Eric for an astronaut in this ABC series set to air this summer. It's set during the '60s and focuses on the women behind the real men who first set out to explore the final frontier. JoAnna will get to keep the Little Mermaid's red hair to play the "bouncy" wife of astronaut Gus Grissom.

It's been a long time since Jennifer Lopez starred on a scripted TV series – you might not even be aware that the singer/actress starred in "Second Chances" in 1994. However, it looks like spending a little time on the small screen made the "American Idol" judge open to the idea of returning to episodic TV. In this NBC series, she'll play a detective who gets recruited to work for the FBI. As part of the anti-corruption task force, she's going to be faced with the tough task of tattling on her co-workers. J-Lo's cop character will also have to juggle this tough job with her role as a single mom. The show will air sometime during the 2015-2016 season.

"Victorious" actress Victoria Justice is growing up by trading Nickelodeon for MTV. The brunette beauty's new drama is based on the book of the same name by "Goosebumps" author R. L. Stine. In Stine's cyber-thriller, a tech genius named Lindy (Justice) tries online dating. She soon starts to suspect that one of the guys that she's juggling is a deadly cyber stalker who is responsible for a series of murders. Lindy teams up with a group of hackers to try to catch the culprit, but obviously he's not going to be easy to catch. No premiere date has been set yet.

This is a very eclectic list of upcoming shows. You've got period pieces, comedies, thrillers, superheroes, cop dramas, and kid-friendly fare. So which of these TV series are you most looking forward to?