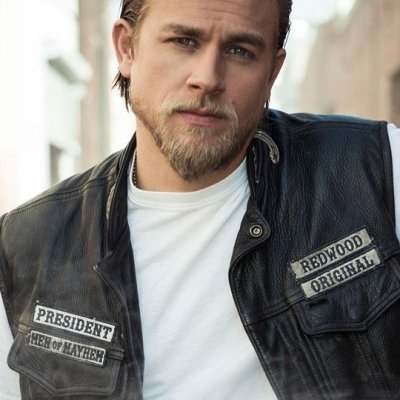 The member of Sons of Anarchy are taking their final ride this year... can you hear me crying?! I am in no way emotionally prepared for this show to come to an end. I've been binge-watching the series from the beginning in order to prepare myself but it's only made my love for the show that much stronger. Sigh, why must all good things come to an end? Check out some of the ways you can prepare yourself for the final season of Sons of Anarchy.

If you can never get enough of Samcro, do what I do and binge-watch the series from the beginning. You'll get to relive all your favorite moments! It's also a great way to refresh your memory before watching season 7 because let's be real, SO much crazy stuff has happened that it's hard to keep track of it all! Binge-watching (thank God for Netflix) is only one of many ways to prepare for the final season of Sons of Anarchy.

Nothing shows your dedication to a series like buying its merch. Last Christmas, my mom bought me a fleece blanket with the SOA logo on it and I nearly cried tears of joy. You don't know how many times I've cuddled up in that blanket and watched my favorite seasons! I also have a long-sleeved SOA shirt that I love to sleep in; it's so cozy! You can buy merch on shop.fxnetworks.com.

Before the season 7 première, don't forget to follow the cast on Twitter! Most of them live-tweet through new episodes which is always so much to watch. Plus, following them on social media makes you feel a bit more connected to them. Theo Rossi (better known as Juice) is constantly posting behind-the-set photos from the show and tries really hard to interact with as many fans as possible!

If you're anything like me, you've probably already watched the hundreds of cast interviews on YouTube. I love them because it shows off the actors' goofy sides and they usually end up spilling on what you can expect in the next season. My favorite interviews to watch, of course, are those of Charlie Hunnam. That man's quite the eye candy. Am I right, ladies?!

What better way to deal with your emotions than talking to people who feel the same way? Trust me, you're going to need that support system once the show comes to an end. Having a group of friends who obsess over SOA as much as you do can be amazing! Together, you can talk about everything.

If you think you're such a SOA know-it-all, test your trivia with some Samcro-related quizzes! Head over to funtrivia.com for some cool quizzes and fun facts.

Until its première, you can re-watch the season 7 trailer over and over again. Get a group of friends and make predictions as to what's going to happen next!

Well, there you have it. These are just seven out of many awesome ways to prepare yourself for the final season of Sons of Anarchy. Of course, how can one ever REALLY be prepared for their favorite show to come to an end? How are you dealing with it?