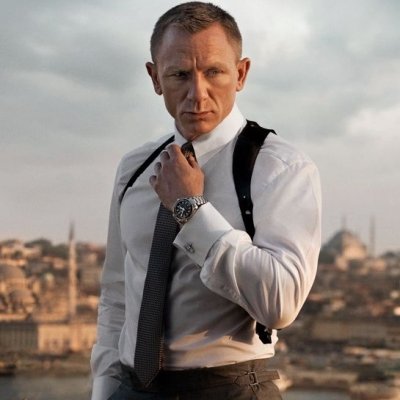 MAJOR MOVIE NEWS! Daniel Craig will be returning as James Bond in the newest 007 film, Spectre. The news was announced by director Sam Mendes at a live-streamed press conference from Pinewood Studios. It was also confirmed that Christoph Waltz and Léa Seydoux will be starring in the film!

Spectre, which is an acronym for SPecial Executive for Counter-intelligence, Terrorism, Revenge and Extortion is the movie no Bond fan will want to miss. It'll hit theaters in November 2015. Are YOU excited for it?!
Here are some other things you need to know about the 24th Bond movie, courtesy of theage.com.au:

- Andrew Scott, who shot to fame playing Moriarty to Benedict Cumberbatch's Sherlock Holmes in the BBC series Sherlock, will play an M15 agent alongside Ralph Fiennes as the new M and Ben Whishaw as Q. However it's widely tipped his character will be traitorous, given Scott's brilliantly creepy take on the Napoleon of crime.

- Dave Bautista, a former wrestler who gained worldwide fame as Drax the Destroyer in Guardians of the Galaxy, will play a henchman called Mr Hinx.

- At 50 years old, Monica Belluci will become one of the -oldest Bond girls of the franchise - but certainly one of the most stunning and talented. Lea Seydoux will play Madeleine Swann.

- Producers have worked with legendary manufacturer Aston Martin to create the DB10, which will feature exclusively in SPECTRE.

- Filming will be based at the UK's Pinewood Studios, and on location in London, Mexico City, Rome and Tangier and Erfoud, in Morocco. Bond will return to the snow once again, this time in Sölden, along with other Austrian locations, Obertilliach, and Lake Altaussee.