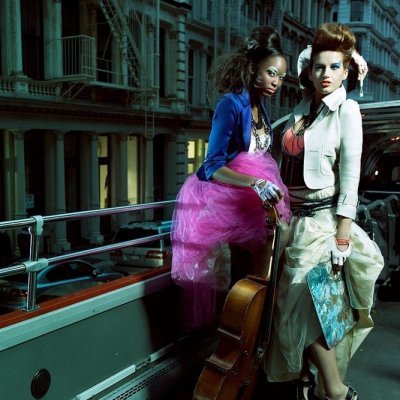 America's Next Top Model gave the world 22 cycles in 12 years, averaging two seasons of dramatic makeovers, epic meltdowns, and increasing contrived melodrama, oh yes, but also fierce looks, fabulous photos, and some genuinely amazing contestants. I'll confess, I stopped watching after the absolute clustermug that was the All-Star cycle when Alison got robbed, but I recently caught a rash of reruns and realized I really will miss the show. I mean, where else will we get moments like these?

As meltdowns go, this one was both the tamest and the most intelligent rant ever witnessed on ANTM. Remember how innocent Cycle 1 was? This also cemented my enduring love for Elyse – seriously, if you were enamored of this smart, feisty pixie girl, too, check out her old LiveJournal!

Here's a cycle 2 gem featuring fan favorite, Shandi Sullivan. Oh, I loved Shandi. I felt so bad for her, but she owned what happened and that's pretty awesome.

This is my nightmare.

I am so glad Yaya DaCosta is showing up in more and more movies and TV shows. I adored this gorgeous goddess – and still do not think she should have had to apologize. Telling her everyone pegged her as “going for the typical African hat” and tries to “prove her Africanness.” Panel, please.

The melodrama used to be so simple! Hands up, though, who loves Toccara's shade? Yaya's is epic, too. She's wearing that shirt for all of us.

Every time I see Kenya Moore on “The Real Housewives of Atlanta,” I think to myself that she is simply no Jade.

In Cycle 6, this was the introduction to the acting challenge. You know, to prove Tyra is a good actress. The girls lost their minds. Did anyone watching, really?

I still … I still wonder about this. I don't know. Still kind of looks fake.

She also blames everyone else for her problems because everyone else is presumably responsible for her time management. This meltdown no doubt had something to do with her inevitable elimination. I was pulling for her, too – she was a lovely girl, even with her unfortunate weave, but that attitude … ugh.

The ever-increasing drama depicted in ANTM's final runway shows pretty much guaranteed a casualty or two.

17. Saleisha Gets a Bowl Cut

Why? Why? This makes her win over Chantal even harder to understand.

So, not only did Denzel have one of the worst makeovers ever, he also spouted some sad, stereotypical BS about gay male models. Bravo to Tyra for shutting it down.

And the end-all, be-all of ANTM meltdowns belongs to … Tyra herself. I wonder if Tiffany still hears TyTy shouting in her dreams.

Will you miss America's Next Top Model? I think it was beyond time to retire it, but I still look back on past episodes, contestants, and winners quite fondly. Yoanna and Naima remain my favorites, I am still angry Nik didn't beat Nicole, and I cried a little tear when Adrienne first married and then divorced her Brady. Who are your faves – and your least faves?