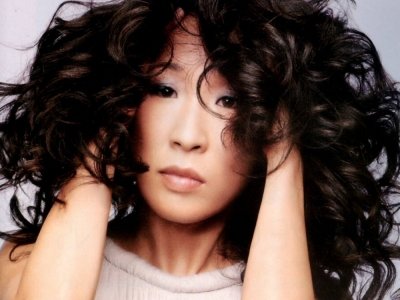 You may be remembering Cristina Yang's best moments because as I write this, Grey's just had its season finale. Fans have said their goodbyes to the brilliant Dr. Yang, played by the incomparable Sandra Oh. I've watched Grey's Anatomy since its premiere, and Cristina has always been my favorite character. She brought something special not just to the show, but to TV in general. She broke stereotypes, followed her passions, and forged her own paths. Her goodbye was bittersweet, because it's hard not to be thrilled for the character. These are some of Cristina Yang's best moments, the moments that stand out to me. Please share yours as well.

Most of these aren't really in any particular order – except this one. The “You're my person” quote is now something of a tradition on Grey's Anatomy, but it started in “Raindrops Keep Falling on My Head,” the first episode of the second season. It is without question one of Cristina Yang's best moments. Cristina is pregnant and does not want to keep the baby. Although close with Meredith, she has successfully held herself pretty aloof up to this point, focusing on getting as many surgeries as possible and proving herself, rather than making friends and sharing secrets. She needs an emergency contact at the clinic, though – and Meredith is her person. Through ups, downs, breakups, and makeups, Meredith remains her person.

Dancing it out is another recurring theme in Grey's Anatomy, and although Callie enjoys dancing in her underwear, nothing beats Cristina dancing with her toothbrush. This occurs in season two as well, in episode eighteen. Cristina ultimately gets in trouble for keeping her own apartment while ostensibly living with Burke, but who cares? Her moves are everything.

I've always been iffy on the relationship between Cristina and Burke. I didn't always like Burke's character, in part because he was always trying to turn Cristina into something she wasn't. Still, their passion sparked straight off the screen, and marriage seemed inevitable. The lead-up to their season three wedding has several hilarious moments – “Mama took my eyebrows!” – but alas, Burke leaves Cristina at the altar. When she discovers this, still in her wedding dress, we expect her to be sad … but she's not really, is she? I think seeing Meredith cut her out of her wedding dress and keep her close is so powerful – and I still love seeing Cristina so free.

In “Drowning on Dry Land,” we almost lose Meredith. This comes before “Didn't We Almost Have It All?” and involves Cristina trying to find Meredith to tell her that she and Burke are getting married. Meredith is busy drowning and dying. Burke gets a little perturbed that Cristina won't tell anyone about their engagement until she tells Meredith, but as Cristina tells him again and again, Meredith is her person. The fight to bring Meredith back is both arduous and touch-and-go, but ultimately Cristina waits, sitting a vigil with her friend – just to share her news. That's love, ladies, and true friendship.

5 Venting in the Vent

I quite prefer Cristina and Owen, still. Even the way she supports Owen through his PTSD speaks to her character and her strength. Never mind their first make out session, never mind the way he saves her life after she gets stabbed by an icicle. There's something about Cristina's face, her wonder, and her demeanor when, in season five's “All By Myself,” Owen takes her to the air vents that just makes me smile too. It's a rare glimpse of Cristina at ease – and she needed it so badly then.

In season seven, Cristina finally makes it down the aisle – with Owen, of course. She is radiant and beautifully defiant in red. Unlike the fancy wedding of Burke's dreams, this is more to Cristina's taste – and she seems so very happy. She's surrounded by the family she's made at the hospital, and as the title suggests, with Owen she's almost born again. Didn't you want this happiness to last?

I actually love every scene that shows Cristina with Dr. Thomas – at least, after she decides he isn't a decrepit old fart. I love William Daniels anyway; I grew up watching Mr. Feeny. Dr. Thomas makes a fantastic mentor for Cristina, and their exchanges are welcome in the oh-so-traumatic season nine, the follow-up to the dramatic season eight finale that saw McSteamy and Lexie dead, Arizona without a leg, and everyone involved suffering in the aftermath. Cristina is so traumatized she takes a job in Minnesota, and gradually forms a relationship with Dr. Thomas – whose speeches rival Mr. Feeny's. When he dies, her single-minded pursuit comes to the fore – but so does the true depth of her compassion.

Let's go back to season seven for a second, shall we? “Slow Night, So Long” contains many meaningful story lines, but we're focusing on Cristina. Remember that traumatizing hospital shooting? It leaves Cristina with PTSD – no surprising for someone who's had a gun to her head, right? If you followed the season, you know she ends up quitting – and takes up a career at the bar. It's a heavy season, and this episode is surrounded by a lot of serious business, but the sight of Cristina all done up '80s style is a light note in all that darkness. This is one of her best moments solely because she's so adorable.

9 The Wonder of Pure Genius

The lead-up to Cristina's farewell is filled with poignant, sometimes heartbreaking moments. No one knew exactly why Burke and many fans feared the worst – surely she wouldn't end up with him! No, not exactly – and no spoilers here, if you haven't seen these episodes. This is just a marvelous example of Cristina's brilliance, her curiosity, her drive, and her desire to learn, know, innovate, and excel. Look at the wonder on her face as she “holds” that holographic heart. Look at that glow. That is Cristina Yang.

Cristina has always been a standout on the show, and I'll miss seeing her every week. She never apologized for being herself, and for not meeting everyone else's expectations. At least we can be thankful that Shonda Rhimes didn't kill her off, like my beloved George. What will you miss most about Dr. Yang?