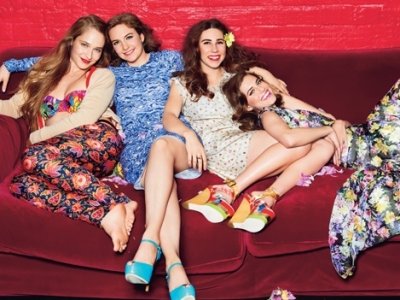 Hannah's friend Jessa is super-cool. She channels that effortlessly cool 90's grunge vibe - maybe it's the British accent or it could be the don't give a f*** attitude or her long hair. Either way, she's awesome, and one of the best reasons to watch HBO's Girls that I can think of.

2. The Relationship between Adam and Hannah

Hannah's relationship with Adam will make you cringe, there's no two ways about it. But (spoiler alert) there's a super-sweet moment at the end of season 2 that makes watching their relationship unfold seem worthwhile.

Yes, men watching the show (they do exist) probably list Marnie as their favorite character and there's no denying she's gorgeous. But her character is just soooo goody-two-shoes that it's hard to warm to her at all. This just makes Girls even more entertaining; you don't have to like all the characters, and most of us will relate to some more than others.

Hannah and her friends seem to live a fairly privileged existence in New York, but this isn't 90210. They have the same problems and struggles as many girls in their 20s have, and you'll come across situations you can really relate to. Having said that, the fact that Hannah seems to live her life in a sort of fairtytale bubble is kind of hard to take sometimes, but it makes for pretty amusing viewing!

5. The Soundtrack is Epic

Having downloaded the soundtrack for seasons one and two, there are already a few songs from season three that have becomes favorites on my playlist. From established artists to indie gems, the Girls' soundtrack has something for everyone and it's great everyday listening.

6. It Gives You Something to Talk about

I love deconstructing each episode over coffee with friends and speaking about the characters. Unfortunately, I don't know too many people who watch the series in the UK, so I'm making it my mission to get as many people into it as I can!

Adam is your typical emotionally unavailable man. He reminds me in a way of so many ex boyfriends of mine - he's damaged by his childhood and his past, he's confused, mixed up and doesn't know how to handle situations or his anger. Yet at heart he's sweet, and he's always there when people need him. It's hard not to feel more and more attached to him as the series goes on.

These are my reasons why you should check out HBO's Girls - there are probably loads of other reasons too. I didn't have space to include Shoshanna; her views on life are always quirky and off-beat! The whole cast of characters work well together and make Girls entertaining viewing; I think it's quite unique and unlike anything else on TV at the moment. Have you watched Girls, and if so what do you think of it?