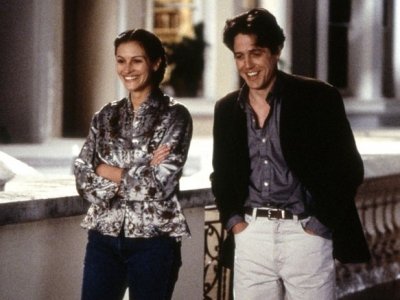 Hugh Grant movies tend to depict him as either the mean British guy, or the bashful British guy. I sort of love both. For all his faults, he is definitely one of my favorite British exports to the Hollywood scene. There are lots of Hugh Grant movies out there, but I reckon these few are favorites of his hardcore fans.

1 Four Weddings and a Funeral

Of all the Hugh Grant movies, this has to be the one that features him at his softest. Poor old Charles (could his name BE more British?) is chasing after the beautiful Carrie. Sadly, Carrie has her eyes set on a super-rich Scottish dude. Carrie also has quite the little black book! That is one of my favorite scenes in any movie: Carrie detailing her past conquests to Charles.

Will Freeman is a rich London-based bachelor with no time for anyone but himself. Along comes Nicholas Hoult in the form of Marcus, and his depressed mother Fiona. Before he knows it, Will is forming a bit of a friendship with this strange little boy. This is a funny and heart-warming film. As a Nicholas Hoult fan, I find watching him in this quite odd!

Daniel Cleaver is an absolute arse, there is no denying that! But Hugh Grant plays him brilliantly, especially as this movie was made around the time we all saw him as Mr Soft. Who can forget the scene where he finds Bridget’s spectacularly huge knickers? And the scene where he fights Mr Darcy? Daniel is just fantastic throughout this.

Back to the whole simpering Englishman thing. I don’t so much love Notting Hill for Hugh Grant. I love it for Rhys Ifans! I think this is the whole being English and living in Wales thing, but I just find the whole kooky Welshman thing hilarious. That aside, the whole connection between Will and Anna is captivating.

Not only does Sense and Sensibility feature Hugh Grant, it has Emma Thompson and Kate Winslet too! Three of my favorite actors in one movie. Hugh Grant is seriously charming in this one. It is a great depiction of a Jane Austen novel too!

6 Bridget Jones: the Edge of Reason

Since when would Daniel Cleaver going to Thailand ever be a good idea? I am amazed that it goes as well as it does. Although it would have been lovely to have a smooth happy ever after between Bridget and Mr Darcy, having Daniel stir things up again is fun too. I do hope we’ll be seeing more of him in the next movie!

As far as I am concerned, Hugh Grant is at his best in Love Actually! Sadly, our prime ministers are never anything like him. I’m not entirely sure whether that is a good thing or a bad thing. Anyway, I absolutely love the scene where Hugh does THAT dance. Personally, I don’t want to imagine David Cameron or any of his predecessors trying it!

Hugh Grant’s filmography is quite impressive. He’s usually thrown into one of two roles, but I think we do love him that way! He seems to be a bit busy battling the press over here in the UK right now, but hopefully we’ll see more from him soon. If you have a favorite Hugh Grant movie, what is it?