7 Reasons to Watch the Walking Dead ... 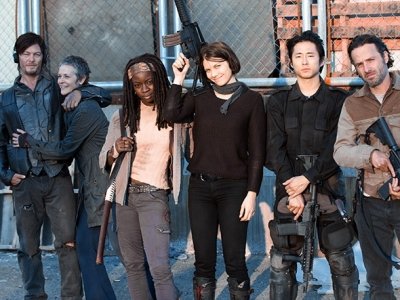 One of the best reasons to watch The Walking Dead is that watching the characters fight for survival is compelling. Most of them are ordinary people who led very different lives before. Now they all have to face enormous challenges, and deal with losing people they love and finding shelter and food. And as well as the 'walkers', they also have to face hostile living people …

The series isn't just a simple question of dispatching zombies (although there are plenty of impressive zombie kills). It also poses a lot of intriguing questions. What caused the epidemic? Who will survive? What kind of society can they build when every day is a struggle? You can also see parallels in the show - do the zombies represent any threats to our way of life? Are we the dead, sleepwalking through life?

3 How Would You Survive?

As much as we like our comfortable lives, it's also fun to imagine what we would be like in the zombie apocalypse. Of course it's not going to happen … we hope. But shows like this can represent fears of how we would cope if disaster struck the planet. Do you have the knowledge to grow food? What about maintaining a shelter or repairing a vehicle?

Some episodes of The Walking Dead can seem a little slow, but they're often setting up the Big Reveal that makes you sit up and shout 'Whoa!' These moments are nicely spaced out and always unexpected. The instant when we realise what happened to Sophia, or what happens when a character dies, are subtle and chilling at the same time.

It's always enjoyable viewing when the female characters are well written and courageous. The Walking Dead has its fair share of strong female characters. Michonne is of course the most gutsy woman in the series, but others do their share of the zombie killing. Over the course of the series, even the quiet Beth learns to defend herself.

Over its four series (so far), The Walking Dead has shown a lot of character development. Sometimes they really surprise you with what the characters do. The rough Daryl starts to show a human side, and sheriff Rick has to fight dirty. Plus the program makers are not afraid to kill off characters you care about.

Well, who wouldn't want Daryl on their side in the event of a zombie apocalypse? He's good with a weapon, knows how to catch something for dinner, and can whizz you away from danger on his motorbike. He's definitely the most interesting character in The Walking Dead.

You don't have to be a fan of the zombie genre to enjoy The Walking Dead, as it focuses as much on the interaction between characters and the way they cope with the loss of civilised life. You also don't need to be familiar with the graphic novels. If you already watch the series, what do you most love about it?