7 Reasons to Watch Orange is the New Black ... 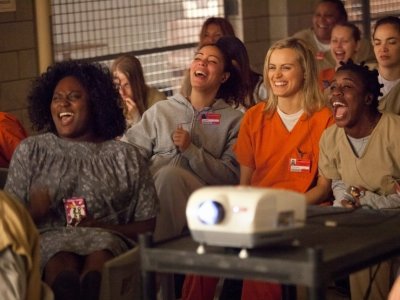 What could happen in an all-women prison? One reason to watch “Orange Is The New Black” is to find out! Piper Chapman is incarcerated after smuggling a suitcase of drug money a decade previously. In addition to the myriad of characters she meets on the inside like the Russian cook who’s starving her out to the drug-dealing guard, Mendez, her ex-girlfriend who got her into this mess, is in there with her. Talk about drama!

There is a certain mentality that Chapman needs to adapt to survive the bizarre world of prison, but sometimes you can’t help but laugh. In one episode, the inmates run to be a part of the WAC team. Each racial group votes within their own which adds some great comedy to the mix as everyone tries to win over their fellow inmates. As Nicky says, “You can only run against the race of your group. Look, just pretend that it's the 1950s; it'll make it easier to understand.”

3 On the Edge of Your Seat

Every episode is incredible and full of such drama that you are sitting on the edge of your seat. Season 2 is scheduled to be released in Spring 2014 and I can’t wait. The first season built me up and now I can’t wait to see what happens to all my favorite characters. What will happen to Chapman during her remaining months? How will she change once she gets out?

One element that I really like of the show is its use of flashbacks. As the advertisement says, “Every sentence is a story.” Throughout Season 1, we get flashbacks to various inmates' pasts and what landed them in prison. I liked this aspect because it allowed me to get a sense of where my favorite characters were coming from. Take for instance, the Russian cook Red who was rejected by her “friends” and got wrapped into some trouble.

“Orange Is The New Black” is my guilty pleasure. I love it! It’s easy to get addicted to this show, with its unique characters and interesting plot. The show isn’t for everyone due to its more graphic nature of, as Mr. Healy says, “lesbian activity,” but I don’t think that should deter you from checking this show out. In fact, I like their frankness. It’s refreshing.

The show has an interesting look on many relationships. Morello dreams about her wedding that everyone knows won’t happen because her “fiancé” has not come to visit her at all. Chapman feels pressured to keep her relationship with fiancé Larry strong, but her old spark for Vause, her ex-girlfriend, is kindled. Red is the maternal figurehead for these girls, but uses some questionable tactics at times. I find it interesting to see how everyone is interconnected.

In an interview with Laura Prepon who plays Vause, she talks about how critics and viewers can agree on one thing about the show: it’s different. There isn’t much like it on TV, that’s for sure. That’s why I think this show is such a jewel. Check it out and see for yourself! You won’t be sorry.

“Orange Is The New Black” is definitely a show I think you should check out. If you watch it, who is your favorite character? What do you hope to see in the next season?