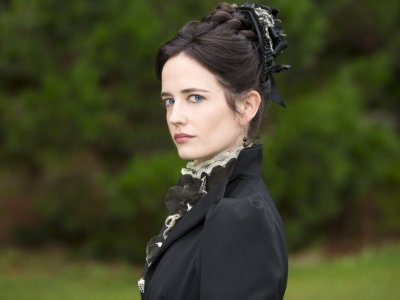 As I write this, Showtime's Penny Dreadful has only been on for two weeks, but there are already so many reasons to watch it. I got to see a few in-depth sneak peeks of the first couple of episodes and fell for the show even before seeing it in its entirety. If you love dark cinematography, moody, Gothic story lines, and gore galore with a point behind it, I think you'll like Showtime's Penny Dreadful, too. It's a little American Horror Story, a little Dexter, and a little Hannibal Lecter (a la Thomas Harris, that is), plus it's just kind of gruesomely gorgeous.

Showtime's Penny Dreadful is the brainchild of creator and writer John Logan. You might know him as the screenwriter of such films as Skyfall, Hugo, and The Aviator, just to name a few. He's got a solid background, and generally makes me feel that characters such as Dorian Gray and Dr. Frankenstein are in good hands. Moreover, as part of the LGBT community, I believe he'll bring some much needed diversity into the premium cable lineup. Although that's profoundly important, his talent is also crucial. Basically, he really has the know-how and the gift to pull this off, I think.

I think the setting of a show can make a huge difference. Sometimes it's central to the plot, as with Scandal (has to be in Washington), Dexter (wouldn't be nearly so interesting if Dexter couldn't dump bodies in the ocean), and Big Love (self-explanatory, I think). A show like Penny Dreadful, given the title and the characters, belongs in Victorian London for any number of reasons. Where and when else, for example, would you find such a brooding, moody, gloomy, and haunted backdrop? It's perfection, and adds as much to the show as the characters themselves.

Well, of course the makeup's important. However, in a show like this, it could go so very wrong. You need all kinds of bodies and body parts, monsters, creatures, and prostheses. Here's the thing, though: Nick Dudman heads up the design team. Know what's on his resume? Harry Potter. He did great work at Hogwarts, and he's going to do great work in Victorian London as well. I don't know about you, but when the makeup and effects look fake, it just turns me off, which is why I'm so glad that's not a worry.

I'm a James Bond fan, yes? Yes. So although this might not appeal to everyone, I'm fangirling all over the James Bond connections in Penny Dreadful. There's John Logan who, again, gave us Skyfall. Timothy Dalton is a marvelous part of the cast. Eva Green, who is thus far absolutely incredible, was in Casino Royale. It doesn't necessarily guarantee a fantastic series, of course, but it definitely doesn't hurt.

I've swooned about some of the actors, so now let's swoon about the characters – twice, actually, because they fall into two distinct categories. First we have the existing characters, based on much-loved heroes, villains, and anti-heroes from literature. I've already mentioned Dorian Gray, played by Reeve Carney. You'll see Victor Frankenstein beautifully done by Harry Treadaway, and his Creature, played by Rory Kinnear. There's also the Vampire, and don't worry – no sparkles, no qualms about tearing people open, and (hopefully) no whimsical vampire love stories.

Pitting original characters against literary characters can be hit-or-miss, because you often run the risk of having the originals overshadowed. That doesn't happen in Penny Dreadful. Timothy Dalton's Sir Malcolm is nothing less than amazing – even when having dialogue with Dr. Frankenstein. Eva Green's Vanessa is already considered an award winner, and my, does she deserve it! I was actually wary, I must say, of seeing Josh Hartnett perform, because he's been gone for such a long time. As sharp-shooter Ethan, however, he's actually really good. I mean, so good that you'll forget that so many of his earlier roles depended on his status as a heartthrob and movie bad boy.

I can't help it. I like gory shows. That's why I fell in love with Dexter and Breaking Bad. The thing is, it's easy to go wrong with horror and gore as well. If you do it for the sake of blood and violence, it just doesn't work. Give me smart violence, give me Breaking Bad, Sons of Anarchy, and lots of plot to go with all the bruising and bloodshed. You get that here. There's meaning behind everything, even when seances run amok.

Penny Dreadful definitely isn't for everyone, but if you haven't seen it and any of these reasons appeal to you, then you should at least give it a try. It pulls you in from the very first episode, but you have to pay attention. At the very least, the promise of Dorian Gray will keep you glued to your TV. Have you seen the show yet? Let me know what you think!