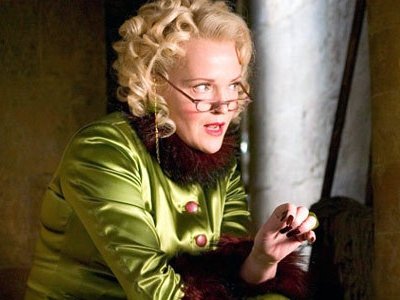 Everyone is familiar with the main characters in the Harry Potter books and films, like Harry (of course), Ron, Hermione and Dumbledore. But there are also hundreds and hundreds of minor characters that help to make the stories truly magical. Some may only appear fleetingly but others play parts in major subplots. Many of them are bizarre or just plain evil, but here are 7 minor Harry Potter characters who are certainly interesting!

Nymphadora Tonks despises her first name so her friends just call her “Tonks,” even after her marriage. Despite being the first cousin of Draco Malfoy, she fights on the right side and works as an Auror (a dark wizard catcher). All in all, she’s a fascinating minor Harry Potter character because she is a Metamorphmagus (she can change her appearance at will, which is very rare) and she marries and has a child with a werewolf.

Gellert Grindelwald is one of the most dangerous dark wizards of all time, second only to Voldemort. He was firm friends with Albus Dumbledore when they were young, and Rowling revealed that Dumbledore was in love with Grindelwald. When an argument ended in the accidental death of Dumbledore’s sister, Grindelwald went on a killing spree before Dumbledore defeated him in 1945.

Moaning Myrtle is the ghost of a young girl who was a student at Hogwarts when she died. She haunts the girls’ bathroom on the second floor at Hogwarts and earned her nickname because she moans and whines about everything. Although she’s a minor Harry Potter character in terms of her appearances, she plays a key role in Harry’s discovery of the Chamber of Secrets, and helps him with the Triwizard Tournament.

The Weird Sisters are a very popular rock band in the Harry Potter series and they perform at Hogwarts when Dumbledore books them for the Yule Ball. The lead singer is played by Jarvis Cocker (of Pulp), while some other band members are played by other members of Pulp and of Radiohead. They performed three songs at the Ball, including the brilliant “Do the Hippogriff,” and Cocker wrote them himself. Jarvis Cocker is famous for invading the stage in protest at the 1996 Brit awards – the UK’s equivalent of the Grammies – when Michael Jackson appeared with a group of children to perform his hit Earth Song.

Rita Skeeter is the dreaded journalist in the Harry Potter series. She uses a Quick-Quotes Quill, which writes by itself and spins the interviewee’s words into something more appealing but generally completely inaccurate. She’s an Animagus so she can transform into a beetle to spy on people, making her a very irritating minor Harry Potter character.

Stan Shunpike is the conductor of the Knight Bus. He is a young, pimply wizard who has a Cockney accent, and is best-known for making up ridiculous things to try and impress people. Stan once claimed to a group of Veela that he was about to be made the Minister for Magic, but his stories eventually get him into trouble, as he is imprisoned when he pretends to have inside knowledge about the Death Eaters (Lord Voldemort’s followers).

Bill is the oldest Weasley child and was a prefect and Head Boy during his time at Hogwarts. When he finished there, he went to Egypt to work for Gringotts Wizarding Bank, but returns to England when Lord Voldemort is reborn. He marries part-Veela Fleur Delacour (otherwise known as Phlegm), and gains some very wolfish tendencies after being attacked by the werewolf Fenrir Greyback.

This is certainly not an exhaustive list of minor Harry Potter characters. There are many who just appear once as a character on a trading card, but there are also some characters who have a fairly large role in the books but who don’t appear at all in the films. These are some of the characters who I like most, but who is your favorite?