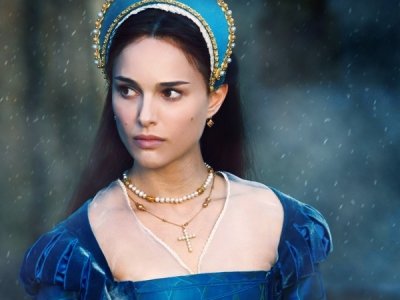 There are times when I cannot get enough of popular culture inspired by Anne Boleyn. She might not be everyone’s favorite queen, but she is certainly the one who commands the most attention! Few of us can forget ‘The Tudors’, but then maybe that has more to do with Jonathan Rhys Meyers and Henry Cavill than Anne? Popular culture inspired by Anne Boleyn isn’t always historically accurate, but it certainly is entertaining!

I once looked into how The Tudors coincided with an increase in Google searches for Anne Boleyn, and it turned out that they rocketed dramatically! This piece of popular culture inspired by Anne Boleyn has probably made her more of a divisive character to the modern world than ever. Personally, I loved her portrayal, and loved Catherine Howard’s even more. I’m sure many people have seen this series, but if you haven’t, do check it out.

2 The Other Boleyn Girl

Now there are two versions of The Other Boleyn Girl out there, but we’ll focus on the Natalie Portman one as it’s probably been the most widely viewed! This film is based on a book that depicts Anne as a harlot who betrayed her sister as well as Catherine of Aragon. The historical accuracy has been questioned to hell and back however, it does make for entertaining viewing.

3 The Private Life of Henry VIII

This 1933 classic is a far cry from the glamor that was relentlessly inserted into The Tudors. Rather than focusing on just Anne Boleyn, it looks at all of the relationships with his wives. Like most films of the time, it plays down Henry’s flaws and exaggerates his wives’ infamous traits. It’s a colorful portrayal of his relationships with them, but quite cute viewing nonetheless.

4 Harry Potter and the Philosopher’s Stone

JK Rowling didn’t base the book on Anne Boleyn. However, if you watch the movie carefully you see her in one of the portraits. The more I read the Harry Potter series, the more I find little historical (and medical) references here and there. They’re so well cloaked, I’m willing to bet JK Rowling had a say in the portrait being featured.

In Henry VIII, Helena Bonham Carter plays Anne! I adore her in Harry Potter, so I cannot wait to see her in this. I am yet to watch it, but I have heard it is a more gritty depiction of Anne’s life. Even better, Ray Winstone plays Henry. In my opinion, you couldn’t pick a better actor for his later years.

6 The Six Wives of Henry VIII

The Six Wives of Henry VIII is one of the most popular documentaries TV lovers turn to when they want to learn about Anne. A British historian named David Starkey is the presenter and narrator. This guy really knows his stuff, but I would’ve preferred Eric Ives. More recently, our royal historian Suzannah Lipscom produced a much better documentary 5 called “Henry & Anne: The Lovers Who Changed History”. If you can watch it, please do!

7 Anne of the Thousand Days

Anne of the Thousand Days was the 1960s version of The Tudors. The actress playing Anne even won a Golden Globe award for her portrayal of the ill-fated queen! Surprisingly, the press gave mixed reviews of the film at the time. However, it was nominated for 10 academy awards!

Anne Boleyn is everywhere in popular culture. I love to read, so one day I may move from biographies and historical books onto novels featuring her! There are DOZENS of them out there. If you love popular culture based on or featuring Anne, what is it and why?