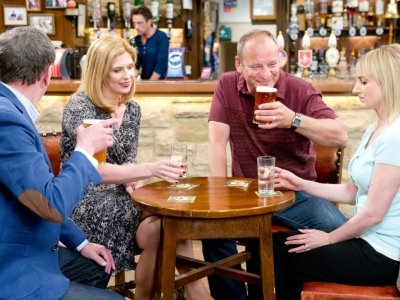 Coronation Street is the longest running of all the British soap operas, now in its 55th year. It is one of the longest running television shows anywhere and it has anchored the early evening schedule of ITV1 for decades. Coronation Street is a typical cobblestone street lined with terraced houses in the fictional northern town of Weatherfield. The street and its immediate environs has a pub (The Rover’s Return), a corner shop, a newsagent, a café, a hair salon, a car repair shop and a factory. The storylines are based around the everyday domestic dramas of the simple folk who live and work in the Coronation Street. Its strength has lain in creating memorable characters throughout its lifetime, with some of them remembered long after they have departed – even non-soap fans in the UK know of Ena Sharples, Bet Lynch and Hilda Ogden. It’s a show so revered that even Prince Charles has made an appearance and many, many actors and entertainers have been seen on the show.

Where Coronation Street depicts life “up north,” Eastenders is set “down south” in Walford, a fictional borough of East London. Where Coronation Street is based around a cobbled street, Eastenders’ characters live, work and play around Albert Square. Like Coronation Street, Eastenders is the tale of everyday folk with much of the day to day happenings going on in the pub (The Queen Vic), the café, launderette and the market. The characters are more definable as stereotypes than those of Coronation Street, with lovable rogues, nasty bad boys, tarts with a heart and most particularly strong matriarchal women. Eastenders has never shied away from tough storylines and has featured rape, drug abuse and mental illness. The first gay soap characters appeared in Eastenders and the HIV storyline surrounding Mark Fowler was met with much acclaim. They claim Eastenders is grimly realistic but I’d have long moved out of this neighborhood if it were true!

Emmerdale is the last of the “big three” British soap operas. If I tell you that it began life as Emmerdale Farm, it will give you a good clue as to the setting. Emmerdale is a farming village in the Yorkshire Dales, and unlike the urban settings of Coronation Street and Eastenders, it is a portrayal of rural life. Originally, it centered on the dramatic rivalry between the Sugden family of Emmerdale Farm and the wealthy dynastic Tate family and the various village folk who frequented the local pub – The Woolpack. (Yes the local pub is a common theme in British soap operas!) Gradually over the years, families from the neighboring village of Beckindale were introduced and farm was dropped from the title. This little pocket of rural England (which tbh is usually a tranquil idyll) is a disaster zone, having seen armed robberies, shootings, explosions, raging weather storms, road accidents and even the devastation of falling debris from a blown up airplane which killed off half the cast.

Great excitement surrounded the beginning of Hollyoaks. Firstly, it was aimed at a younger audience (teens to mid-20s), secondly it was the brainchild of Phil Redmond, who had already enjoyed great success with Grange Hill (a kid’s soap set in a comprehensive school) and Brookside (a soap set in Liverpool) and thirdly, it was to be aired on Channel 4, known for pushing the TV envelope and reaching out successfully to its target audience. Described as fast-paced and issue-based, the setting is Hollyoaks, a fictional suburb of Chester. Initially, the main characters were just seven students at Hollyoaks Community College, but over the years the show has expanded to include all manner of local characters, many of whom congregate in the pub of course (The Dog in the Pond.) True to the ethos of its Channel 4 home, Hollyoaks has tackled some gritty issues, including male rape, incestuous rape, self harm, schizophrenia, gay clergy and dodgy business dealings.

Most daytime soaps on British TV have been Australian (Neighbors, Home and Away etc), that is until along came Doctors. Filling the slot after the afternoon news on BBC1, Doctors is the story of the staff and patients of the fictional Mill Hill Center and its sister Campus Surgery in the West Midlands town of Letherbridge. Although each episode features a one-off story, the lives of the main characters are followed, scrutinized and dissected as a continuous thread and that’s why it qualifies as a soap rather than a series. What makes Doctors different to the other British soap operas is that its storylines are more realistic and obviously based on medical issues. That doesn’t mean it steers clear of the dramatic. Plot lines have included mental illness, Borderline Personality Disorder and the effect of rape.

It would be so wrong to not include The Archers on the list of long running British soap operas. The huge difference between this and all the others on the list (and the many that have come and gone since) is that The Archers is a radio soap. Airing daily on BBC Radio 4, it is the world’s longest running soap opera in any format, with the first episode broadcast on May 29th, 1950! Known as “an everyday story of country folk,” The Archers is set in the fictional village of Ambridge, in the fictional county of Borsetshire in the English Midlands. Over 5 million listeners tune in (and 1m on the internet) to listen to six episodes every week to catch up with the drama of the lives of the Archer family of Brookfield Farm, the goings on in the village and beyond and of course, the characters they meet in the village pub, The Bull. Listeners who have never missed an episode from the beginning will have experienced over 17,300 episodes!

If the name looks slightly odd, that’s because it is Welsh, and translated into English it means People of the Valley. You guessed it! This is a soap opera about the lives of everyday folk in the Welsh Valleys. Pobol y Cwm (pronounced pobble e coom) has been on the BBC schedule since 1974. These days it airs on the Welsh Language TV channel S4C, but non-Welsh speakers can watch a sub-titled omnibus (that is until the budget cuts, which will mean this stops in 2015). Pobol y Cwm’s setting is the fictional village of Cwmden in the Gwendraeth Valley (real) in south-west Wales. Most of the action takes place in (can you guess what’s coming?) the pub – Y Deni – the village’s homes and small businesses, Penrhewl Farm, and Ysgol y Mynach (the local school). Unlike other long running British soap operas, sensationalizing and over-dramatizing everyday life is rare and the focus is very much on life in the valleys. Filming is often on the day before airing so current events are often written into the story. (p.s. PYC brought us Ioan Gruffudd).

As I am not a soap fan – I have dabbled with a few over the years and dip in and out of them occasionally – I don’t really know how British soap operas compare with those of other countries (except Australia!). Do you watch any of these? What about your own country’s soaps? What are your favorites?