7 TV Bromances That I Cant Get Enough of ... 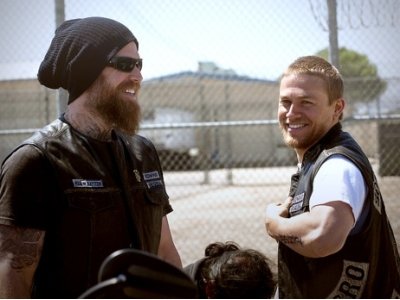 TV bromances can really make or break a show. I know there's been times where I've kept up with a particular show just because I loved the friendships in it. It's such an awesome dynamic to see "best friends" on TV because it lets you compare them to you and your own BFFs! Also, it's just super fun to watch guys love their bestie like we girls love ours. Check out my list for my favorite TV bromances!

Cory and Shawn hold the title for my all-time favorite bromance. Their friendship spanned through middle-school, high school, and college. They grew up and became men together! Along the way, they went through so many things. They were always there for each other, and it really was one of the best TV bromances to grow up with. Fingers crossed that Cory's daughter in Girl Meets World has a strong relationship with her BFF!

It's guy love! J.D. and Turk have one of the funniest bromances. They're the ones that made Scrubs worth watching. With each episode, we'd fall more and more in love with their friendship. They were there for each other through everything. I absolutely love the fact that Zach and Donald are actually real life BFFs. How epic is that?

With some partnerships it is easy to tell if they'll work out or not. Not this one. These two were thrown together through circumstance and opportunity. Of course, their bond was one we all never wanted to be broken. I don't really want to say too much because I know there are actually some people who have yet to see the series. I won't spoil anything!

4 Jax and Opie (sons of Anarchy)

Okay, spoiler alert! I bawled like a baby when Opie died in season 5. Seriously, I was heartbroken! I loved the friendship Opie and Jax had. They were truly like brothers, and never judged each other no matter what. I wish Opie was still around. He was definitely one of my favorite characters from the show!

5 Michael and Dwight (the Office)

No show has ever made me laugh as much as The Office. Michael and Dwight would bump heads now and then (which is always hilarious) but in the end, they were best friends. Let's not forget Dwight's wedding in the series finale! When Michael showed up, I couldn't stop crying tears of joy. I love their bromance!

I just recently got into this show! I know, I'm super late, but thank you Netflix for letting me binge-watch so easily! Shawn and Gus are kind of like the equivalent of J.D. & Turk from Scrubs. They're hilarious together. Their bromance definitely makes the show.

I love watching this show. Especially because of how handsome these men are in their suits. I mean, look at them! Their friendship starts off kind of rocky, but in the end, they always have each other's best interest at heart.

Well, there you have it! These are just 7 out of many epic TV bromances. I know there are A LOT more bromances that should have some recognition, however, these are from shows I've actually watched. Which one is your favorite? Which TV show do YOU think has the best bromance?