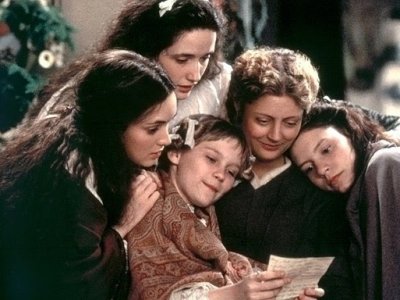 Movies based on classic novels often get criticized for not being as good as the books, but there are plenty of movies that are just as good as classic books. If you don't have the time or desire to read old English, but are dying to know what all the hullabaloo is about a certain story, you shouldn’t feel guilty watching movies based on classic novels. But not all movies are created equal. Some films stay true to classic plots and are performed better than other films. Here are a few of my favorite films based on some of my favorite books!

Jane Austen’s novels helped define Victorian literature. Perhaps her most well-known novel is Pride and Prejudice, featuring the immortalized characters Elizabeth Bennet and Mr. Darcy. In my opinion, the best rendition of Pride and Prejudice to hit the big screen yet has been the version directed by Joe Wright, starring Keira Knightley and Matthew Macfadyen. Austen fans will always debate which cast did the best job with Pride and Predjudice, but as far as movies based on classic novels go, this has to be one of the best!

Another one of my favorite 19th century authors is Louisa May Alcott. Her style differed greatly from Austen, but her works were superb nonetheless! She wrote tons of fabulous books, but her most popular is probably Little Women. Adapted from Alcott’s life story, Little Women tells the authentic tale of four sisters growing up in post-Civil War America. The March sisters have been brought to the big screen several times, but my favorite version is the 1994 film starring Winona Ryder as smart and spunky Jo March. The actors did a marvelous job bringing Alcott’s characters to life, and overall the film stayed true to the book’s plot quite nicely!

The Great Gatsby by F. Scott Fitzgerald is nothing short of a masterpiece. It’s full of symbolism and life lessons, with characters you can’t help but feel passionate about. So translating The Great Gatsby from paper to the big screen was no small undertaking. Recently though, in 2013, director Baz Luhrmann did just that rather successfully. I remember reading The Great Gatsby for the first time, and reading the same passages over and over again, intoxicated by Fitzgerald’s eloquent use of imagery. And those same passages are the scenes that stood out in the latest remake of The Great Gatsby. If you haven’t seen this exciting film yet, I recommend that you do!

While Romeo and Juliet isn’t technically a novel, it's a classic nonetheless. If you’ve read Shakespeare’s most popular play, you know how artful and dramatic it is, but you also know how tricky the language can be. So, to get a more comprehensive idea of the play, whether you’ve read it or not, I’d recommend watching the 1996 version of it. This movie, like the play, is somewhat of a classic. The unconventional setting places Romeo and Juliet in a 1990s suburb, but stays true to the plot and even the Elizabethan language. Like many classics, Romeo and Juliet has been remade countless times, but this version certainly redefines creativity and outshines them all!

5. Oz the Great and Powerful

This blockbuster film took the classic novel The Wonderful Wizard of Oz, tweaked it a bit, and created something magical. In Oz the Great and Powerful, you’ll follow James Franco on his journey from our world to Oz, where he becomes, you guessed it, the Wizard of Oz. But how he gets to that point is where the greatest part of the story lies! Whether you’ve read L. Frank Baum’s classic telling of The Wonderful Wizard of Oz or not, this film is certainly worth watching!

6. The Chronicles of Narnia

7. Gone with the Wind

You’ll only find one version of Gone with the Wind, and that’s because nothing could outdo this classic movie based on the classic novel! The movie won eight Academy Awards for a reason; it was controversial, well-acted, and overall incredible! If you don’t have the time to sit down and read Margaret Mitchell’s Gone with the Wind, you should certainly watch the 1939 movie retelling of it, because you won’t be disappointed!

Classic novels deserve to be read, but in our busy lives we don’t always have time to read them. That’s why we’re so lucky to have talented directors, producers, and actors to bring these gems to the big screen! If you’re looking forward to watching one of these movies, which one is next on your must-see list? What other movies based on classic novels do you recommend?