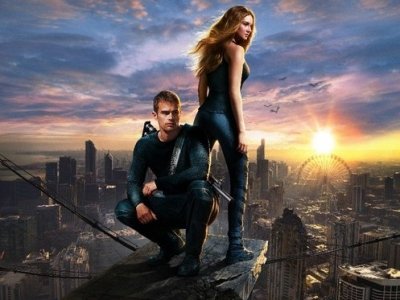 If you haven't heard about the "Divergent" movie, then you need to go watch the trailer right now! If you have heard about it, then you're just going to read what you already know - you're excited. This is here to narrow down just a few things that you should be excited about when it comes to this movie. Let's take a look at some of the reasons you need to be excited for the "Divergent" movie.

If you've read the books, you're excited for the movie. These books are addicting! The "Divergent" trilogy is the type of book that once you pick up, you can't put down and that usually makes for a good movie. Of course, the worry here is that the movie will be horrible in comparison, but we can only hope for the best. If you've read the books, then chances are you are super pumped for the "Divergent" movie.

Have you looked at the cast of this movie? Ashley Judd, Kate Winslet, and Mekhi Phifer are just a few of the awesome people in this movie. The casting is great and all of the actors are definitely helping the movie to reach its potential. With such a great cast on top of an awesome storyline, there's a lot of excitement building around this movie. No matter what the story line is, a cast can make or break a movie and in this case it looks like they're going to help make it.

Even though the cast was already mentioned, Shailene should be especially discussed because she is the main character. Despite getting started in "Secret Life of the American Teenager," Shailene as made quite the name for herself in movies. It seems as if she's going to do a great job portraying the character, Tris, who is strong, powerful, and independent, but also just a teenage girl. A lot of people are really excited to see her in this role.

Yes, the cast was mentioned earlier and maybe it should have just been noted there, but he needs his own section. Theo James is definitely some awesome eye candy. Not only is he good looking, but the role he is going to play is a really incredible character and it looks as if Theo is going to do a good job. He shouldn't be why you see the movie, but he shouldn't definitely be one reason you're excited to.

Despite being a fan of the books, this movie just looks so good. People who have never read the books are interested as well because it just looks like it's going to be an amazing movie. The movie will touch on so many topics and doesn't have a romantic story line as the focal point like so many other YA books that turn into movies. "Divergent" looks like it can be a great movie that is enjoyed by a variety of age groups rather than just teens.

As stated earlier, these were really exciting books which hopefully will make for exciting movies. There is a lot of action, fight scenes, twists, and turns that make this movie worth seeing. If you love "The Hunger Games," chances are you'll love this too. Many have said that this series is even more adrenaline inducing than "The Hunger Games" movies! If you're looking for a movie to get you pumped up, then you need to check this out!

It's another trilogy! I don't know about you, but I love when books and movies come in a series. This doesn't mean when a movie is made and then there are six sequels just because they did well. What I mean is when there's a story that is stretched out over a series because it needs to be for the full impact to be felt. A trilogy means you're excited, you have something to look forward to, and you're invested. What could be better in a movie?

There are so many reasons to be excited for this movie, this doesn't even scratch the surface. Are there any reasons I missed? Why are you excited? What are you not excited about?