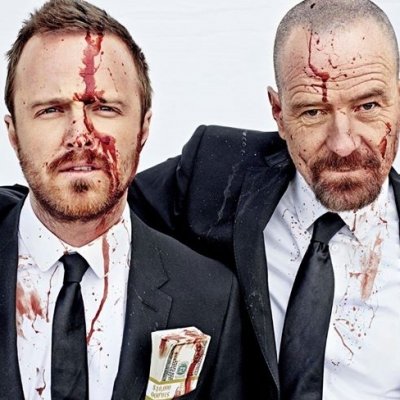 It's not enough that Aaron Paul, who is maybe the nicest guy in Hollywood, took a huge stand for Aaron Hill – an autistic 16-year-old who was recently beaten up while attending a party – inviting the teen and his family to come to Disneyland and giving his violent bully a public dressing down. The Breaking Bad train just won't stop! The most epic on-screen/off-screen bromance is still delighting fans, even after one of the most epic finales ever.

In preparation for the Emmy Awards, Walt and Jesse teamed up once again with fellow nominee Julia Louis-Dreyfus. In a spoof titled “Barely Legal Pawn,” Bryan Cranston and Aaron Paul play pawn shop owners who critique Julia's item: the Best Supporting Actress Emmy she received for her work on “Seinfeld.” This naturally leads to some hilarious quips from Aaron, who's up for Best Supporting Actor and has to argue with Bryan that supporting roles are just as important lead roles.

Check it out and have a laugh!

What are some of your Emmy predictions? Do you think Julia will finally get an Emmy for Lead Actress?