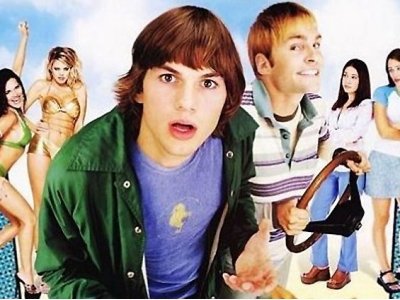 Frankie Muniz and Amanda Bynes were as popular as it gets back then. In this film, they travel to Los Angeles to find the man that stole Muniz’s essay and made it into a film. This is one of the comedies from the early 2000s that will keep you laughing. If you don’t think the dialogue is funny, you’ll at least find humor in the corny bits.

We all still adore Ashton Kutcher. In this film, he plays a pothead that is unable to remember where he parked his car. He and his best friend try to find it, and end up running into trouble. There’s even a supernatural element to the story that comes into play when aliens come looking for a dangerous device. If you want to watch something ridiculous, this is the film for you.

How could you hate a film with Ben Stiller and Robert De Niro? The latter plays a disapproving father who meets his daughter’s fiance. They don’t get along well, but it wouldn’t be entertaining if they did. This story is relatable to anyone who has had to meet their partner’s parents. It’s a scary event, but with any luck, it’ll end positively.

Sandra Bullock plays an FBI agent who has to go undercover as a beauty pageant contestant. She isn’t your typical feminine princess. She’s a toughie who hates heels and dresses. Although she’s not a girly girl, she is taught to act like one. This film is a classic that you have to watch if you haven’t seen it twenty times already.

Everybody loves a snow day. There’s nothing better than turning on the news to see that your school is canceled for the day. In this movie, a group of kids steal a snowplow in order to make sure that their school remains closed. It’s a fun, silly comedy that’ll make you relive childhood.

David Spade searches for his parents after being abandoned as a child. He’s made fun of for his looks and attitude, but tries to prove himself. He's seen as an idiot, but the audience realizes that he has a big heart in order to make up for his lack of intellect. The movie explains that once, he was a nobody. Now, everybody wants to hear his story. Do you?

This animated film shows the adventures of Mike and Sulley, two monsters who scare children for a living. However, when one little girl follows them back to their world, they’re the ones who are terrified. In order to stay out of trouble, they have to find a way to get the child back to her home without anyone noticing.

There are amazing movies from every decade. Which one of these films did you love? Are there any that you used to have on repeat?