School of Rock the Best Jack Black Movie Ever Made ... 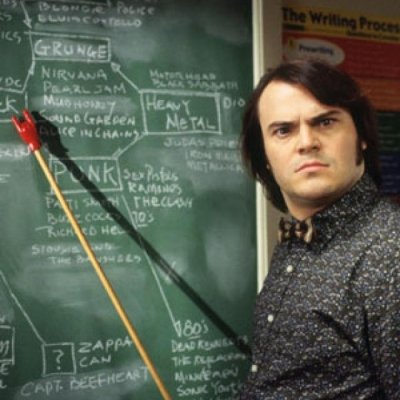 It’s been 11 years since School of Rock literally rocked the silver screen and gave us a Jack Black who was playing the guitar and head banging to rock and roll music. It’s been 11 years since I expected a sequel but none happened and then, last year, the media reported the reunion of Jack Black and the cast of The School of Rock. Looking back, I think that the movie was the best Jack Black film ever. Here are my reasons why I said so:

Admit it, there is no special twist in this movie. After all, the plot was really ordinary: a just-evicted member of a rock and roll band faked his identity and worked in a school where he converts his pupils and builds a rock and roll band with them. But The School of Rock is special because of excellent execution by Jack Black and the supporting cast composed of kids. It was fun to watch and it's a feel-good movie worthy to be watched on a Friday night.

In The School of Rock, Jack Black plays Dewey Finn, the unemployed ex-member of rock and roll band ‘No Vacancy’ who can’t pay his rent. Finn’s love for the musical genre is crazy enough for him to pose as his best friend Ned and teach children! Jack Black embraced this character with precision and talent and that made Dewey Finn stand out.

Black is the other half of the rock comedy duo Tenacious D (the better half being Kyle Gass) and his musical talent is showcased in The School of Rock. Black (and Gass) gives a different spin on rock with the infusion of comedy (think hilarious lyrics) and The School of Rock is one outlet that cemented his brand of music.

I didn't believe at first that the kids who actually played their instruments and sang vocals in The School of Rock are “real”. I mean it’s a film, they can fake it, right? But when the cast of School of Rock gathered for a reunion last year and you see them all grown up but still singing and playing their instruments (while Jack Black didn't age at all), I felt like a proud Aunt wanting to give them all a hug.

Summer Hathaway (played by Miranda Cosgrove) didn't sing in the film but she was lovable as the band manager, the know-it-all, competitive kid in school. I loved how Summer interacts with Dewey Finn and how they seem to be on the same wavelength in discussing the ‘future’ of the band. Summer is more mature than Dewey Finn and she provides that crucial balance in the film.

There’s rock and roll – a lot of strings, drums, and head bangs – but at the core of this film is a message that tells parents to not force your children to do what they don't want to do; and you don't need a former band member (turned substitute teacher) to make you realize that.

What is great about this film with Jack Black in the driving seat is that it looks like everyone really had fun! It’s really an entertaining film that doesn't fake talent and style.

What do you think about The School of Rock?