7 Reasons You Should Be Binge-Watching True Detective ... 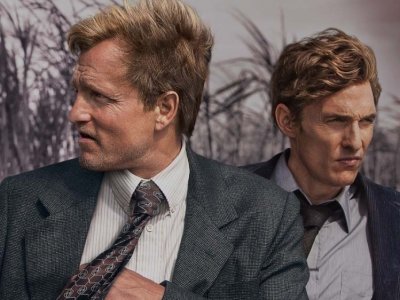 If you have yet to watch True Detective, you're living life wrong. I just recently became a fan and all I have to say is - what took me so long?! It's absolutely addicting. The concept and characters of the show are truly captivating. Check out some reasons why you should start watching True Detective!

If you ever doubted whether or not The Academy was right in giving Matthew McConaughey the Oscar for "Best Actor," doubt no more. Matthew delivers an amazing performance in just the short span of eight episodes. His character, Rustin "Rust" Cohle, is dark and mesmerizing, like nothing Matthew has done before. It's really a thrill to watch his character develop in those episodes. Woody Harrelson is also amazing but True Detective just wouldn't be the same without Matthew McConaughey.

True Detective is told through multiple time frames. In its eight episode spread, the story jumps between 1995, 2002, and 2012. To keep up, you really have to pay attention to everything that's going on. You get your answers eventually. Because of all the time jumps, we see characters grow and develop quickly. There's no word if season two will have the same story structure, but I think it's a really cool thing about the show.

True Detective is jam packed with controversial discussions that are not usually seen on TV. McConaughey's character, Rust, has a cold logical realism. His deep aversion to religion might be off-putting to some viewers. In the first episode he tells Marty, “We are creatures that should not exist by natural law. I think the honorable thing for our species to do is deny our programming, stop reproducing, walk hand in hand into extinction, one last midnight, brothers and sisters opting out of a raw deal.” Pretty heavy, huh? Then there's Marty. His views are a bit more traditional but his morality isn't always A+ behavior.

4 The Focus on the Characters

There are tons of cop shows out there. Usually, the show will quickly introduce its cast and then dive right into the police cases. True Detective, however, spends more time showing us who these people really are. We learn what Rust has been through and we see that Marty isn't really the "good" guy we wanted to believe he was. With the multiple time frames, we see how each character has changed over the years. Both Rust and Marty are two complex, captivating characters.

I don't need to tell you that Woody Harrelson is an incredible actor. He delivers an incredible performance as Marty, a cop whose viewpoints are a lot more traditional than his partner's. However, viewers are forced to watch – time and time again – his moralistic lapses: infidelity, violence, hostility and untruthfulness. He's a man who preaches morality but definitely does not practice it as often as he should. His character is not as dark as Matthew's but it is just as dynamic and complex.

True Detective aired on the HBO network. What I love about that network is that there really are no boundaries to what they'll show on TV. It gives the show a more "real-life" feel to it. The network allows the witty and sharp dialogue and even the sometimes disturbing visuals.

When the show starts, it follows detectives Rust Cohle and Martin Hart as they investigate a murder back in 1995. It then flashes forward to 2012, where Cohle and Hart are being questioned by cops about the case. It leaves you to think, was the case ever closed? The show will bring up MANY questions and hopefully we'll get a lot more answers.

Well, there you have it! These are just seven out of many reasons why you should start binge-watching True Detective, like NOW. If you're already a fan of the show, what's your favorite thing about it?!