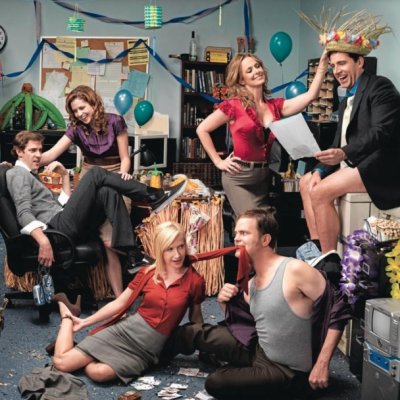 I have finally completed my binge watch of all nine seasons of “The Office” – the US version, that is. I fell in love with the first episode and continued being delighted even after the heartbreaking departure of Michael Scott. I've never in my life wanted to work in an office, not even one time … until I watched “The Office.” I plan on taking on the original British version next, so prepare to see another one of these because I'm certain my next dream will be to work in an office in the UK.

1. When You Realized That You Feel This at Your Current Job

2. When You Shared Kevin's Mindset

If you assume this means that an office is a good fit for you, then you are wrong. I hear tell that offices are breeding grounds for stupidity, requiring ample amounts of patience.

3. When You Thought about Parlaying PowerPoint into a Career

4. When You Dreamed of Making Work Friends

How awesome would that be? Work friends! Your own Dwight and Kelly and Ryan and Toby! Well … maybe not your own Toby.

5. When You Envisioned a Fun Working Environment

Surely every office is full of fun and camaraderie, right?

6. When You Have the Perfect Side-eye Anyway

Might as well put it to good use on the daily.

7. When You Dreamed of Taking out Your Aggression

The one regret I have about working from home is that I cannot have a work nemesis. I can't even turn the cat into my archenemy because we're cool now.

8. When You Also Dreamed of Pranks

I want to have a work fiend – fiend, not friend. Man, I really want an office nemesis.

9. When You Imagined All the Flash Mobs

And the dances and the singalongs and the … wait. Wait. That doesn't happen in real life.

10. When You Spend a Lot of Your Time Looking like This Anyway

Staring off into the ether. Thinkin' 'bout the future. Wondering when your life went off the rails. Might as well get paid for it.

11. When You Fantasized about World Domination

You've gotta start somewhere. Might as well start with a middle management position.

12. When You Imagined All the Office Parties

Parties for birthdays, President's Day, Valentine's Day, Secretary's Day … oh, all the parties! All the cake! All the ice cream!

13. When You Thought about Getting the World's Greatest Boss

Probably won't happen, but wouldn't it be great?

15. When You Imagined Being Surrounded by People Who Really Love You

Even though you're bound together by the mundane quality of the day to day.

16. When You Dreamed of Finding Your Soul Mate at Work

Admit it. You once thought about finding the Jim to your Pam, the Dwight to your Jim, the Holly to your Michael, the Michael to your Ryan – you get the idea.

17. When You Realized You Can Be Fabulous Anywhere

Even in Scranton, PA.