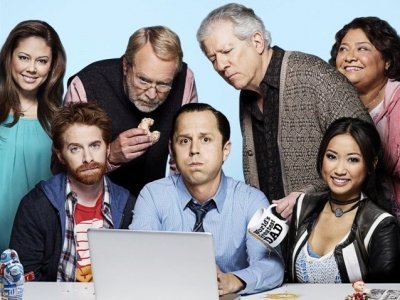 BBC America plays some shows that just are absolutely amazing, and then there's Atlantis. The show isn't bad; I just can't make up my mind about it. The show isn't about this underwater mystical land that I assumed it would be about. What's interesting is that we get to see people like Hercules and Medusa as regular people. The problem is it's a little slow. I just can't make up my mind, which is why it's one of the TV shows I'm on the fence about.

This is a show with a pretty cool premise. Basically, there are cyborgs that have joined the police departments to help human cops. The first episode was OK and I hear it has gotten a lot better, so I probably shouldn't have given up on it. It just didn't do it for me at first, but it wasn't bad either. I'm pretty sure there was a scheduling conflict with another one of my shows. I'm considering getting back into it, I just can't decide.

This show has some similarities to "Almost Human," but they're actually very different. In "Intelligence," the FBI has put a chip into a human's brain so that he is basically like a walking computer. They then try to partner him up with regular humans, but he doesn't want a partner. Obviously, they find him a partner eventually and the first episode leaves off with a good cliffhanger. I'm on the fence about whether or not to bother with the second episode, but what if it gets really good?

This one I gave so many chances. How could I not? Seth Green is in it and I adore him! This show just didn't make me laugh that much and kind of left a feeling of "eh" at the end of it. Of course, I couldn't let it go that easily, so I kept watching more episodes. Every so often I get the urge to give it another try, but I can't decide if it's worth the time. With this one I'm leaning more towards just giving up, but I'm still on the fence.

I love the legend of Sleepy Hollow, so I was super excited for this. After the first episode I felt really let down, but what if it got better? Eventually I just stopped watching and of course I hear it's amazing now, but what do I do? The season is pretty much over now so catching up would be annoying, but if it's good enough then it would be worth it. The problem is deciding whether or not this show should take precedent over all other shows and I should try again.

Jonathan Rhys Meyers as a vampire is enough to want to watch this show, but it was actually a little boring. Since I gave up watching it, with my luck it probably became super fast paced and awesome, but I'm not so sure about that. I've thought about going back when I feel bored and like I have nothing to watch (which rarely happens), but I just can't bring myself to do it. Would it be worth revisiting? I just don't know.

7 Once upon a Time in Wonderland

I'm obsessed with Alice in Wonderland, so I was really excited about this show. Also "Once Upon a Time" is a really great show, but OUTW was kind of a let down. They turned the story line basically into a love story and it was really slow moving. The acting was pretty good as well as the effects, but the story was just kind of not enough to hold interest. This left me on the fence because of my love for "Once Upon a Time" and Alice, but the show just doesn't do it for me.