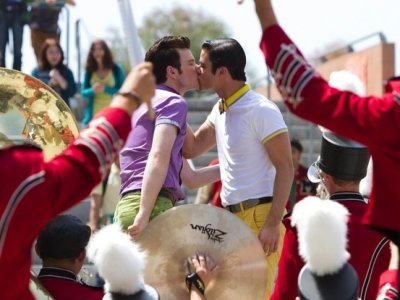 There's just something about watching TV and movie proposals that never gets old. Like many writers have said before me, we just can't seem to avoid getting entrenched in the lives of our favorite characters. To be honest, sometimes that's the only refuge I can find from the cluttered mess that is my mind. The result is that we get to see things that many of us might like to see in real life but usually don't get the chance. That is definitely the case for some of my favorite TV and movie proposals. Some are elaborate; others, not so much. Either way, they're all sweet.

This is definitely one of the best TV and movie proposals I've seen. It's charming in that, while it's very elaborate, it's also done in a very personal and private way. The elevator is covered in scans that look plain to us, but Derek tells a personal story behind each and every one that shows that he's taken note of all the little things we forget over time. To make it even sweeter, they got married by writing vows on a Post-it note that they have framed in their bedroom.

"I was wondering if you wouldn't mind marrying me very much." It's sweet in its simplicity! I'm sure "Mr. Tiger" will attend. I'd suggest giving him a bow-tie collar and tuxedo, but something tells me that wouldn't work very well.

With same-sex marriage (finally) becoming legal in parts of the country, I'd be remiss if I didn't include a gay marriage proposal. Mitch and Cam's proposal on "Modern Family" was awesome, but what I really liked about this one was the way everyone - from Kurt's dad to his best high school friends to the glee club at a rival school - got involved to make this a proposal none of them would ever forget. The best part is that not only do we get to hear an awesome and incredibly romantic performance from Darren Criss, we get to hear about a different side of marriage from Kurt's dad. It serves as a reminder of how we really only have *so* much time with the ones we love, so we need to make it count.

April Kepner's hottie boyfriend Matthew proposes to her via a flash mob dancing to "I Wanna Be" by the Proclaimers in front of the entire hospital. As it turns out, this kid can dance! I was hoping he'd find a reason to take his shirt off too, but I guess this will have to do.

This scene makes it easy to see why this movie has been called one of the most iconic movies of the '80s. I don't know about you, but I used to see this and think of how sweet it would be if a man came and declared his love in such an unexpected and romantic way. All these years later, it still gives me chills. The ad is also interesting, albeit in a completely unrelated way.

If getting one engagement ring is exciting, imagine getting the entire store! Okay, technically she didn't get the whole store, but you get the point. She had her pick of everything in the room, including rings that probably cost more than my car. For a down-to-earth girl like Reese Witherspoon, that's a dream come true. The fact that we get to look at Patrick Dempsey again is definitely a plus!

7 Robin and Barney, How I Met Your Mother

When it comes to elaborate and risky proposals, this one takes the cake. Forget a flash mob at a hospital or booking an entire jewelry store; Barney went through what had to be at least a month-long process-a "play," as he calls it-to get Robin to come to the roof of their apartment building and learn that she was the one he'd intended to propose to all along. She's rather upset by the whole ruse, but quickly melts when she sees Barney on one knee. Considering that Barney is one of the biggest TV womanizers we've ever seen (made even funnier by the fact that the actor is gay), it really says something that he's willing to "burn the playbook" to be with Robin after all they've been through. The video quality isn't the best, but it's still worth watching.

As satisfied as we might be with our "real-world" lives, there's just something about watching a great proposal that brings out the romantic in all of us. What are some of your favorite TV and movie proposals? Are there any Cassandra and I have left out? Discuss!