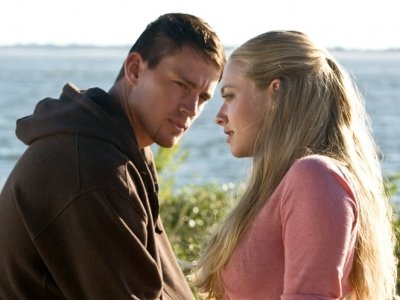 If you’re into romance and chick flicks, chances are you have seen a few Nicholas Sparks inspired movies and read his books. From Message in a Bottle to Safe Haven, his books and movies have moved us, inspired us, and broken our hearts. Nicholas Sparks inspired movies are classics that can be watched over and over again; I can’t tell you how many times I’ve watched The Notebook and could probably watch it a few hundred more, rying each time!

1 Message in a Bottle

This Nicholas Sparks inspired movie was among his first, but wouldn’t be his last! The book was released in 1998 and the movie starring Kevin Costner and Robin Wright debuted in theaters the following year in 1999. Message in a Bottle was Nicholas Sparks’ second novel, but the first to inspire a movie adaptation. The story begins by Robin Wright’s character, Theresa, finding a bottle with a message in it written by Kevin Costner’s character, Garret, to his late wife. Theresa sets out to find Garret and well the love story that unfolds is one you just have to read or see to believe! This is a great one to watch and read as it was inspired by the love of Nicholas Sparks’ parents.

2 A Walk to Remember

Well, here is something I didn’t know about the ‘Walk to Remember’. The book is set in the 1950s while the movie is set in the 90s. The novel was released in 1999 and the film followed in 2002 starring Mandy Moore as Jamie Sullivan, a minister’s daughter, and Shane West as Landon Carter, the bad boy in town. Jamie is quiet and keeps to herself, while Landon is popular and likes to stir up trouble with his friends. But somehow the two lives intertwine and Landon’s life is forever changed. I have also learned that the novel is loosely based on Nicholas Sparks’ sister’s life, which makes me want to read the book now more than ever.

Although this was the third adaptation of Nicholas Sparks’ novels, it was actually the first published; the book was released in 1996, but it wasn’t until 2004 that the movie hit theaters. If you haven’t read or seen “The Notebook”, or any of the films or novels on this list, make this one your first! The love story of Noah and Allie, played by Ryan Gosling and Rachel McAdams and the love story of Duke and Allie (James Garner and Gena Rowlands) will inspire you to fight for whomever your heart beats for. “The Notebook” proves just how crazy love can make us and how true love never dies. The story behind Nicholas Sparks’ first novel was inspired by the grandparents of his wife, who had been married for more than sixty years when he met them!

I love the way all of Nicholas Sparks’ novels come to life so beautifully in these films; the actors must have been picked so carefully because they all do an outstanding job. If you thought Ryan Gosling and Rachel McAdams were a match made in heaven, wait until you see Richard Gere and Diane Lane as Dr. Paul Flanner and Adrienne Willis in “Nights in Rodanthe”. The two are trying to find themselves after failing in love for two different reasons, or should I say having love fail her in Adrienne’s case. Life is messy and complicated, but love should never be. Find yourself and fall in love again by watching this movie and reading the novel.

Being separated from the one you love is one of the toughest things your heart can go through, especially when that person is in the military fighting in the line of fire. Channing Tatum stars as John while Amanda Seyfried plays Savannah, the girl who fell in love with him while he was on leave for two weeks. As he goes back overseas they write letters, keeping in touch and trying to hold on to those crazy two weeks where they fell in love. However, it’s not always easy to hold on when the lives you live are completely different and far apart. This movie, like many of Nicholas Sparks’ novels and films, will break your heart, but will teach you a lesson in love and life.

Do you believe in luck, fate, or destiny? Well, you may after watching “The Lucky One”, which is a tale about Logan (played by Zac Efron) who is fighting in Iraq when he finds a picture of Beth (played by Taylor Schilling). He keeps this photo with him and after surviving a nasty bomb explosion he believes that Beth is his good luck charm and sets out to find her. Logan may just be what Beth needed as she is dealing with troubles of her own. Can a book or a movie change your mind or inspire your life, and will this be the one to do so?

This Nicholas Sparks’ novel twists things around and gives the female character a mysterious past instead of another wrong side of the tracks image for the male character. Katie (Julianne Hough) finds herself in a small town that most people only pass through and as she tries to keep to herself, widower Alex (Josh Duhamel) reaches out to her and just can’t leave her be. However, her past catches up with her and she has to choose whether to run again or stay and let this new love give her a “Safe Haven”.

So you may be wondering where “The Last Song” is? Well while it is a great Nicholas Sparks novel and movie, there are only 7 films featured in this Nicholas Sparks Limited Edition Collection. You can purchase the DVD collection over on wbshop.com, The official release date is January 28th, but you can pre-order yours now!

Are you going to place an order?