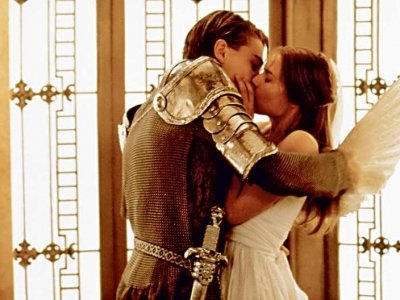 90’s chick flicks are a necessary ingredient for a great girl’s night in. 90’s chick flicks had a certain charm and essence that modern movies lack. While I love modern films, 90’s movies had a more subtle approach to humor and drama, which is why I love them all so dearly! Here are a few of my favorite 90’s chick flicks you absolutely must see!

This amazing 1999 chick flick is a high school rom-com revolving around the geeky Kat Stratford and mysterious Patrick Verona. The characters in Ten Things I Hate About You are lovable, and the plot is hilarious! Combine that with a talented cast featuring Heath Ledger and Joseph Gordon-Levitt and you’ve got yourself one of the greatest 90’s chick flicks!

She’s all that was another chick flick made in 1999 about a nerdy high school girl, but differs from 10 Things I Hate About You in its own unique way. In the film, cool guy on campus, Zack Siler, makes a bet that he can convince Laney Boggs, a reclusive artist, to go to prom with him as prom queen. But, as in most films, it isn’t that easy! There’s lying, betrayal, and lots of complicated love! But the combination of all three is what makes She’s All That one of my favorite 90’s chick flicks.

Clueless is another 90’s Chick Flick set in a high school, but it’s worth watching whatever your age! Clueless defined an era and humorously exaggerated the stereotypes about 1990’s youth. The movie is a parody of Jane Austen’s novel Emma, but revolves around Cher Horowitz, the spoiled daughter of a rich lawyer. While on the surface Cher seems shallow, she’s one of the most admirable characters portayed in any 90’s film, because she always puts others before herself and loves unconditionally! This movie is delightful, refreshing, and my absolute favorite 90’s chick flick!

The 1996 remake of Romeo and Juliet was creative and inspired! The idea of Shakespeare’s world-famous play set in a hip suburb may have left some people skeptical when the movie first premiered, but I can assure you it’s a fantastic film! If you’re looking for an truly entertaining 90’s chick flick, Romeo and Juliet is the movie for you! Sometimes the classics make the best modern movies.

Pretty Woman was a rather edgy film, but it helped launch Julia Roberts’ career as an actress. In the movie, Edward Lewis hires a “pretty woman” named Vivian Ward to escort him to numerous social events. But Vivian is more than just a pretty face in an nice dress - she’s also a prostitute! Vivian swears herself off love, but that may be difficult to accomplish when spending the week with Mr. Lewis. Overall, the movie is fast-paced, entertaining, and a must-see for you and your girlfriends!

Spice World is a rather strange 90’s chick flick. But while the movie didn’t always make perfect sense, its sense of adventure is right on point! Spice World revolves around the pop group The Spice Girls as they embark on their world tour. But more than their many adventures, Spice World is about the relationships between five young singers. If you’re looking for a good laugh and a shining example of what friendship really means, look no further than Spice World!