7 Reasons to Watch and Love Freaks and Geeks ... 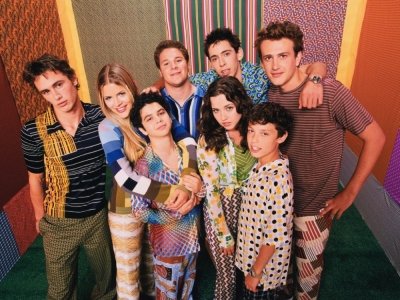 If you haven't already watched Freaks and Geeks, then what are you doing with your life?! It truly is a must-see show. I had heard such great things about the show so I checked it out recently. It's safe to say that I finished the series in just a matter of days. Granted, the show only lasted one season (18 episodes) but they're the best 18 episodes ever. Check out the reasons why you should watch and love Freaks and Geeks!

Freaks and Geeks was a teenage comedy-drama series. It showed the ups and downs of high school. The interesting thing is that it focused on two different spectrums in high school, the freaks and the geeks. Can't we all relate?! The show felt very genuine and heartfelt because it was all real-life feelings and situations. The geeks were my favorite just because they're all so adorable!

The cast of this show is amazing. No one really knew these people when the show aired, but man, they all grew up to be huge A listers. James Franco, Seth Rogen, Jason Segel, Busy Phillipps, and Linda Cardellini all starred as the "freaks". John Francis Daley, Samm Levine and Martin Starr were the "geeks". Any of those names ring a bell? They should because they're all super successful now! It's amazing to see them all together when they were all starting out in the acting world.

This is a huge part of any show/movie. Freaks and Geeks incorporated so much fantastic music which I loved! There are so many scenes that are enhanced with great songs. For example, the scene where Nick serenades Lindsay with Styx's "Lady", or when the freaks drive around on Halloween to Cheap Trick's "Gonna Raise Hell". Or how about the scene where Bill just watches TV after school while The Who's "I'm One" plays. I would go on but there's just so many to name!

Oh gosh, where do I begin? The cameos in this show are great! A baby-faced Shia Labeouf makes his appearance as the school mascot who ends up breaking his arm. Rashida Jones (you probably know her as Ann Perkins from Parks & Recreation) made her Freaks & Geeks debut as a bullying, boyfriend stealing "friend" to Kim Kelly. Other big names that appeared were Ben Stiller, Jason Schwartzman, and Lizzy Caplan! Seeing as the show only lasted 18 episodes, it's impressive that they crammed in so many big names!

This show really is incredibly funny. There are so many laugh-out-loud moments whether its a freaks' scene or a geeks' one! I loved that even though the freaks were kind of "cool", they weren't really considered cool in school. They were also a bunch of awkward teens. I think this show did a fantastic job at capturing the inherent humor of being an awkward teenager.

So many high-school shows nowadays offer happy romances and happy endings. Not this one! At least, not without showing the struggles that come along with them. The teens on Freaks and Geeks speak like real high-schoolers, which makes things more believable. You realize that these teens are just flawed people trying to figure out where they're going in life; just like the rest of us.

I love that this show focused a lot on real life situations, whether it be about handling your school crush, getting picked on in gym class, cheating on tests, etc. Even though this show is was set years ago, there are still moments where you can go "wow, that's just how high school was for me!"

There you go! Seven reasons to watch and love Freaks and Geeks. If you have Netflix, start watching it right now! When you're done with that, start "Undeclared". You'll see a bunch of Freaks & Geeks members make cameos! If you've already seen it, how much do you love it?