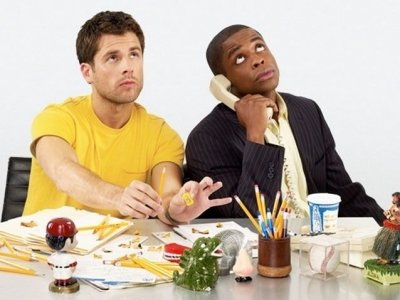 There are countless reasons to watch Psych. It's truly a fantastic show! If you haven't seen it, it's time to start. Lucky for you, Psych is on Netflix, which means you can start your binge-watching as soon as tonight. I'm so glad I finally got around to watching the show because it's become one of my favorites! I've been obsessed with it for the past few weeks and let me tell you, it's definitely a binge-worthy show. Here are some reasons to watch Psych!

1. It's about Two Besties

Shawn Spencer and Burton Guster have the best bromance. They've been best friends since they were kids, and now they decided to go into business together. They get into the craziest situations and it's so fun to watch them try to get out of it. They have their own sort of secret language (I mean, does anyone truly understand what they're ever talking about to each other?!), healthy competitive spirits, and tons of love for each other. Their bromance is just one of the reasons to watch Psych.

Gus is pretty intelligent, in all different topics. Once in a while, he'll spark up conversation with a random thought. My favorite one is when he's trying to impress a girl at the science center. So, to start conversation he says, "You heard about Pluto? It's messed up, right?" I mean, what girl doesn't love talking about whether or not something is qualified as a planet? Gus always knows just what to say.

The cast of this show is fantastic! James Roday (Shawn Spencer) and Dule Hill (Burton Guster) are hilarious. They're the perfect ones for the job. Not to mention Maggie Lawson and Timothy Omundson, who play the detectives! The show has great acting, with a great story line. It's definitely a show worth watching, if you haven't yet.

4. Brush up on Your Observation Skills

Shawn Spencer is hyper observant. He notices every little thing around him. Maybe that's why it's so easy for him to pass himself off as a Psychic! In each episode, it shows you exactly what Shawn notices, and how it connects to everything else. That way, you can teach yourself to be just as observant. Or at least try. I don't think anyone's memory will be as good as Shawn Spencer's!

This show is very much set in the present, but Gus and Shawn always slip in some '80s references. So, if you're a fan of the era, you'll definitely appreciate this. Shawn's talked The Breakfast Club and the board game Clue on countless occasions. Even if you don't know anything about the '80s, this show will actually inspire you to look it up. What other show has the power to do that? It definitely stands out from other shows.

Psych has been on for eight seasons so far! The thing that's keeping it alive is the heart of the show. They always manage to keep the show fresh, full of energy, and laughs. The characters naturally mature with each season, but still keep it on a level that we love. They work hard on this show and it shows.

It's hard for a comedy series to keep their show fresh and make sure their writing doesn't just die out. Psych is an expert at delivering the laughs. The writing of the show is very fast paced and witty, which keeps you on your toes. I think the only other comedy series with writing I truly enjoyed was Scrubs. So, this says a lot about the show!

Well, there you have it! If you're a fan of Psych, then you know there are about a hundred other reasons to watch the show. So, these are just a few of my own personal picks. What do you love most about Psych?